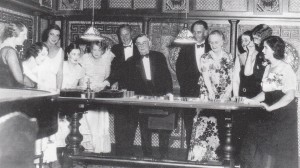 The Willows in Reno, Nevada

Despite an influx of newsmen into town to report what gambling now looked like in Nevada’s biggest city immediately following legalization, a move they described as “reviving the days of the pioneer west,” the status quo endured (Nevada State Journal, March 21, 1931).

“There was no wild rush to the gambling resorts and the Saturday night celebration was but little different from that of other Saturday nights. The only apparent difference … was to center interest of the country on the fact that people gambled in Reno and now may continue doing so, without violating a law,” the Reno Evening Gazette reported (March 23, 1931).

After Governor Frederick “Fred” Balzar had signed the bill into law on Thursday, March 19, 1931, the business-as-usual atmosphere primarily was because some forms of gambling already were legal prior to him doing so and other illegal forms operated, albeit underground. High-stakes and roulette games were new, though, and began to appear.

A Minor Snafu
The recent legislation required any casino to obtain a license and pay the necessary fees in advance for every gaming table and/or slot machine they had on site. Any new enterprises, therefore, had to do so immediately, but those already licensed under the previous law could wait until their existing one, good for three months, expired.

In Northern Nevada, a minor snag, however, prevented the Washoe County sheriff from issuing licenses to anyone who’d applied. He didn’t have the necessary forms because the printing company hadn’t delivered them yet. This delay spanned five work days. Finally, on Thursday, March 26, Sheriff E. Russell Trathen dispensed the first license to the proprietor of the Owl Club. By week’s end, he’d issued 64 to various businesses.