Law Officers Battle Over Gambling in the South 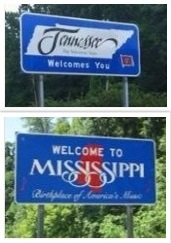 They couldn’t just agree to disagree. They were the sheriffs of two bordering counties in different states.

Sheriff Guy Joyner of Shelby County, Tennessee insisted illegal gambling was taking place just past the state line in The Magnolia State whereas Sheriff Elton S. Baxter of DeSoto County, Mississippi asserted no such activity was occurring in his jurisdiction.

Fueling the Embers
Joyner reignited and escalated the ongoing dispute when on Monday, December 9, 1940, he had a 10-by-30-foot sign erected on the side of the highway in his county that read:

“Down the road in Mississippi are gambling dens run by thieves; they cheat you, they rob you, they slug you, they get your money.”

In this message, “down the road” referred to DeSoto County, and in fact many nightclubs operated there, within about 100 yards of the border. Joyner had armed deputies guard the sign around the clock. “Anyone who thinks he can drive by and shoot it down will have his tires blown off, and he will be dealt with severely,” he publicly warned (The Kingsport Times, Dec. 12, 1940).

Striking Back
Mississippians were unhappy with the sign. Citizen groups expressed their outrage, as did local newspaper editorial writers who suggested Memphis first “‘clean its own house’ before seeking to reform the world.”

Baxter said, “The battle that is raging between Tennessee and Mississippi is not over morals. Memphis and Shelby County want to keep the money that is being spent in the night clubs at home. It isn’t gambling and drinking or anything like that which is causing the rumpus, but a question of cold, hard cash on the part of Tennessee interests. Memphis people are running DeSoto County’s night clubs.”

When Mississippi Governor Paul E. Johnson was asked to weigh in, he paraphrased a Bible verse in Proverbs. “As Solomon said, ‘He that meddleth in strife not of his own making is like he who passeth by and pulleth a dog’s ear.'”

Upping the Ante
Joyner wrote in a letter to Baxter that “some day or night with axes, bloodhounds and sledgehammers, ‘I will break down those doors,'” referring to the clubs, “‘and make kindling wood of all gambling equipment'” (The Kingsport Times, Dec. 15, 1940).

Countering the Threat
On Saturday, Baxter replied: “I advise you to confine your activities north of the state boundary line. There are plenty of citizens in this county who are anxious to defend the county against your proposed activity. I intend to treat you like I would any other ordinary law violator if you, any of your deputies or any person connected directly or indirectly with your offices comes into the state of Mississippi and especially DeSoto County and undertakes to presume the prerogatives of officers of this county.” He reiterated he was unaware of any places with gambling operating in his county, but if they existed, he wouldn’t protect them.

Softening the Blow
Then, Joyner sought to learn where the exact boundary line between the two counties lay. He noted the dividing line hadn’t been established in court. “It may be, after all, those dens are in Tennessee,” he said (The Biloxi Daily Herald, Dec. 16, 1940).

Eight days after having the billboard installed, Joyner modified it, adding the words “two miles” and “Memphis,” perhaps thinking that might pacify Mississippians. The new version read:

“Two miles down the road in Mississippi are gambling dens run by Memphis thieves; they cheat you, they rob you, they slug you, they get your money.”

Taking a Stand
Subsequently, Johnson said he’d ordered operators of the stateline establishments to close and leave Mississippi. After praising the governor for that move, Joyner ordered the sign painted over. It was done. He noted it would be taken down soon, and that was done, too.

With the final word on the issue, in 1940 at least, Baxter said he hadn’t heard from Johnson that he’d kicked out the gamblers.