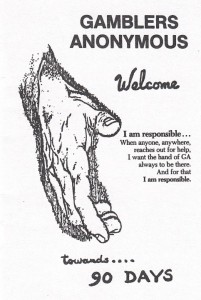 Las Vegas, Nevada resident Howie C. had gambled so much during the 1950s and ’60s that he owed banks, finance companies and loan sharks. He often had borrowed money from his mom and even liquidated her life insurance policy and cemetery plot for more. His addiction had cost him $200,000 and his marriage.

“Reno and Las Vegas are worse than other areas for the compulsive gamblers because of the 24-hour life that is available,” he said. “Once a person becomes a compulsive gambler, he will find gambling anywhere. We just make it easier for him” (Nevada State Journal, July 29, 1973).

He eventually quit gambling, though, with the help of Gamblers Anonymous (GA), and subsequently was able to work as a casino craps table supervisor without succumbing to the temptation.

Despite the Silver State legalizing gambling in 1931, it wasn’t until 1958 that the first chapter of Gamblers Anonymous in Nevada was launched. It was organized by four members from the Los Angeles unit, the first such group in the United States, formed the previous year. The program was based on the model of Alcoholics Anonymous, founded in 1935.

Reno, however, experienced two false starts with GA, the first in 1962, the second in 1965. It wasn’t until 1973 that a new attempt at a Reno-Sparks group stuck, spearheaded by Howie C.

(It wasn’t until 1980 that the American Psychiatric Association recognized compulsive, or pathological, gambling as a mental disorder.)

Further, during the 1950s and 1960s, the growth of gaming and the population increased in the Las Vegas area (Clark County) whereas both declined in the Reno region (Washoe County). This might explain why the support group took longer to become rooted in the north than in the south.

Today, up to 6 percent of Nevada adults may have a gambling problem, according to the Nevada Council on Problem Gambling. GA remains active throughout the state.