Was Betting on “Old Maid” Legal? 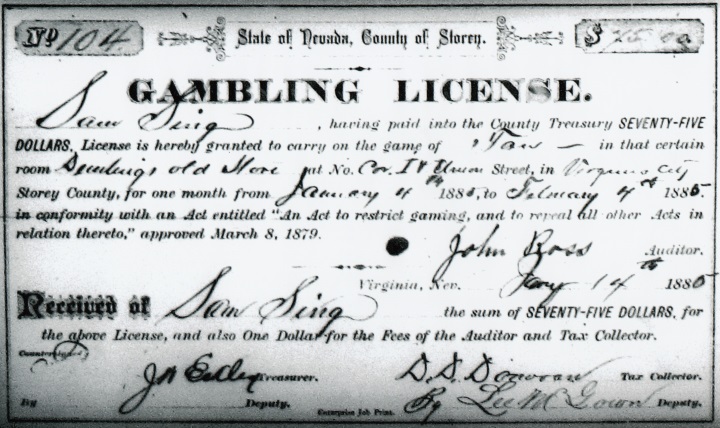 Since becoming a U.S. territory, Nevada has undergone periods of full, partial and no legalization of gambling. Here’s a timeline of what types of games of chance legislators allowed or disallowed and when:

1861: GAMBLING ABOLISHED: The initial Nevada Territorial Legislature banned the dealing, running, opening, conducting or playing of any game of faro, monte, roulette, lansquenet or rouge et noir or any banking game (where the player bets against the house) played with cards, dice or any other device for anything of value.

1865: Anti-gaming law reiterated: In the first legislative session after Nevada joined the Union in 1864, lawmakers replaced the territorial law with a state statute outlining a similar ban.

1869: Gaming partially legalized: Nevada legalized only the games outlawed in 1861 and mandated operators be licensed.

1873: Lotteries prohibited: Lawmakers banned lotteries, which were defined as any scheme for the disposal or distribution of property, by chance, among paying players.

1885: Legal/illegal games changed: An amendment allowed stud-horse poker, or percentage, with a license. It outlawed roulette.

1901: Slots deemed illegal: The state prohibited the playing or offering of nickel-in-the-slot machines or similar devices.

1903: Bookmaking allowed with license: A new act made it legal, with appropriate licensure, to engage in, conduct or carry on any bookmaking on horse races, prize fights or any games conducted outside of the state.

1910: GAMBLING ABOLISHED: The new anti-gambling act went into effect at midnight Sept. 30, 1910. It disallowed all gambling mentioned in prior acts and amendments along with tan, fantan, seven and a half, hokey pokey, craps, klondike, whist, bridge whist, five hundred, solo and frog. It also forbade any gambling games in which the operator, for making the game available, received compensation or reward or a share of the money or property wagered. It banned offering or playing slot machines along with all kinds of bookmaking.

1915: Some gambling excepted: The legislature legalized poker; stud-horse poker; five hundred; solo; whist; parimutuel betting on horse races; slot machines for the sales of cigars and drinks; and social games only played for drinks and cigars served individually or prizes up to $2 in value.

“Gambling on casino or old maid is a serious crime, a felony,” noted the Nevada State Journal (Sept. 28, 1930). “But on poker or solo or whist it is all right. Betting on a dog race is felonious, but the same bet on a horse race is clothed with the sanctity of the law.”

1931: WIDE-OPEN GAMBLING LEGALIZED: Lawmakers passed a liberal gaming law that remains in effect today, which legalized all forms of gambling except lotteries and which required licensing of operators. Along with slot machines, the law listed the approved games: faro, monte, roulette, keno, fantan, twenty-one (blackjack), seven and a half, big injun, klondike, craps, stud poker and draw poker. The law permitted slot machines; any banking or percentage game played with cards, dice or any mechanical device or machine; and any game in which the operator receives compensation or reward. It also removed the rules surrounding social games.