A sextet of flimflammers arrived in Las Vegas, Nevada in December, set up at the corner of Main and Fremont Streets and began separating the locals from their money.

” … the spindle was ‘cleaning’ the town — getting away with large sums of ready money, which would otherwise have gone to local merchants or citizens who conduct legitimate gambling games,” reported the Las Vegas Age (Dec. 22, 1906). 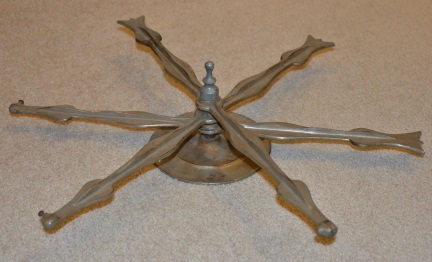 The spindle is spun, eventually stopping at a pin, which is associated with a good or bad prize.

Even in an honestly operated game, the player’s chances of winning were low. In a cheating game, the operator could physically manipulate the pointer to stop at certain pins.

How? The pins were twisted into the board, some ever so slightly higher than others. With a secret gaff, the pointer could be moved up or down to hit either lower- or higher-set pins.

Because the gang had obtained a gambling license from the deputy sheriff, their swindling activity was tolerated for several days. It all came to a head, however, when they fleeced a young man said to be “unsophisticated” out of $125 ($600 in 1913, the earliest year for which inflation conversion is available), and the neighbors encouraged him to press charges. He did.

The scammers were arrested and pleaded not guilty.

At their ensuing hearing, evidence proved the spindle game was what the Nevada statutes defined as a “hogging” game — one that easily lent itself to cheating — which was illegal. However, based on insufficient evidence against the gamblers, the judge dismissed the case.

The hucksters continued to fleece the locals for another week and, again, were arrested. The second trial ended as the first had.

That time, however, the con men got the hint and left town.