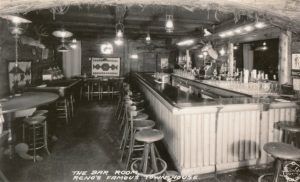 District Attorney Melvin E. Jepson, in his opening statement, asserted the state would prove the defendant had committed premeditated and deliberate murder.

Blackman’s attorney, Harlan L. Heward, offered that his client admitted to shooting Lannigan but the act had been in self-defense; that because his client, a man with a solid reputation, was disabled, he’d had to carry a gun to protect himself; and that his injuries had indicated Lannigan likely had used brass knuckles or a similar weapon when he’d struck Blackman.

Livelihood as Gangster
During the trial, various witnesses revealed snippets of Lannigan’s past. His real name was John Nicholson, but he went by Lannigan because an aunt and uncle with that name partially had raised him. The monikers under which he’d served time were John C. Nicholson, John Cline and James Moran. As a youth, Lannigan, along with fellow gang members, had held up speakeasies routinely and by age 20, had been believed to have committed murder.

In 1928, he’d begun a five-year-to-life sentence at San Quentin State Prison for armed robbery. There, he’d been put in solitary confinement or otherwise punished 16 times for various infractions, including knife cutting an inmate in the face, striking another convict in the head with a length of pipe, stabbing yet another prisoner with a shiv, stealing from the tin shop and insubordination, among others. At one point, he’d been in solitary for 362 days in a row.

After Lannigan had relocated to Reno in the summer of 1944, several times local police officers had told him to leave town, as they’d considered him an “undesirable,” “dangerous and aggressive” person whose employment was being “a gangster,” (Reno Evening Gazette, November 29, 1944). Instead, he’d stayed.

Soon after, in August, Lannigan had been arrested for armed robbery of $14,000 at the Ta-Neva-Ho casino at Lake Tahoe, along with his accomplice and friend from San Quentin, Marvin Paul Michaels. Whereas Lannigan had been released due to lack of evidence, Michaels was to stand trial, which was about to begin any day. This allegedly was the court case for which Lannigan wanted money from Blackman, for the defense of Michaels, who was facing repeat offender charges.

No Choir Boy
As for Blackman, he’d been arrested several years earlier in Texas for attempting to pass counterfeit money, a mistake, he claimed, because he’d been handed a bill that he’d then tried to use to buy cigarettes. Further, the case had been dismissed. He also admitted to having been fined $10 for gambling and having forfeited $25 in bail once when he’d been arrested for dealing a game of 21.

More to the Story?
In court, Jepson contended there had to be a reason why Lannigan had chosen Blackman specifically to extort. He vowed to unearth and reveal what it was, but he never did.

“One of the puzzling matters in the trial is why Lannigan allegedly persisted in trying to obtain money from Blackman despite the fact he had been advised to let him alone by men who had known him [Lannigan] for years,” reported the Nevada State Journal (April 15, 1945).

Last Ditch Efforts
Six days into the trial, the prosecution called a surprise witness, Lannigan’s widow, Barbara Nicholson, who appeared dressed in a Women’s Army Corps uniform. She contradicted Blackman’s testimony by saying she’d met him before, at her apartment where Blackman had visited once to look at some clothes; that she, her husband and the defendant had a friendly conversation and drink together at the Town House one time previously; and that Hilliard, upon her request, had taken a $100 bill, not a weapon, out of Lannigan’s pocket in the hospital.

A verbal volley, in the form of closing arguments, ensued between the prosecution and defense.

After deliberating for 4.5 hours, the jury found Blackman not guilty.