The heyday of the Monte Carlo casino resort in Monaco was The Roaring Twenties, but that was due in large part to the solid foundation laid by François Blanc decades earlier, who stepped in after its seven initial, turbulent years.

The casino actually began in 1856 as two different gambling houses that later were merged into one. Various owners and cash flow problems plagued the enterprise until Blanc, in 1863, acquired the exclusive right to offer games of chance in Monaco for the next half-century. He’d successfully run a casino in Bad Homburg, Germany for more than 20 years.

Blanc’s successful vision for Monte Carlo was to offer an array of sought-after amenities, to be enjoyed all in one facility.

“The Monte Carlo casino-resort had emerged as the world’s gambling playground of choice — the only place for hundreds of miles to play legally at cards, dice and wheels. After people lost enough money, they came for glamour and luxury, gambling was secondary,” wrote Mark Braude in Making Monte Carlo: A History of Speculation and Spectacle.

When Blanc died in 1877, his secretary, Count Antoine Nicolas Bertora, ran the gambling for the next 17 years.  Subsequently, Blanc’s daughter, Camille Blanc, assumed control until she fell ill.

By 1922, however, the casino desperately needed another visionary. It was failing in the wake of World War I due to inflation, austerity measures, restricted travel and an influenza pandemic.

Enter Rene Leon. Similar to Blanc, Leon reinvented Monte Carlo by offering amenities and events that catered to the whims and desires of the period’s trendsetters, such as F. Scott and Zelda Fitzgerald. Thus, according to Braude, the casino experienced “its Jazz Age heyday as the infamous playground of the rich.”

For a glimpse inside this legendary Monaco gambling house, here are 3 artistic portrayals, presented in order of creation: 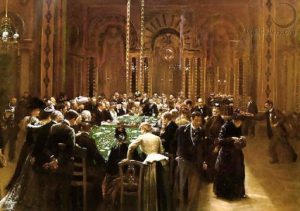 French painter, Jean-Georges Béraud, created this oeuvre at age 45. He’s renowned for his numerous paintings depicting life in Paris and the nightlife of high society during the Belle Époque. 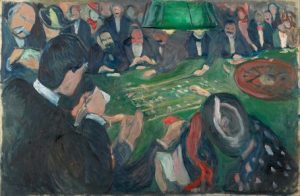 At the Roulette Table in Monte Carlo, 1892 (oil on canvas)

Norwegian artist, Edvard Munch, painted this piece at age 29 after having spent much time playing and becoming obsessed with roulette in Monte Carlo. “Once you’ve penetrated the enchanted castle of Monte Carlo you’re already bewitched — and you’ll return — you have to,” he noted in his journal (Making Monte Carlo, April 2016). 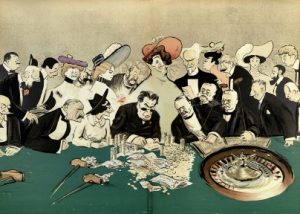 Gamblers in the Casino at Monte-Carlo, 1910 (color lithograph)

French artist, Georges Goursat, known as Sem, also famous during the Belle Époque, is known for his caricatures, many of prominent French socialites. He crafted this piece at age 47.

Popular Subject
Over the years, the Monte Carlo, inside and out, inspired various types of art. Here are the links to 4 more portrayals: