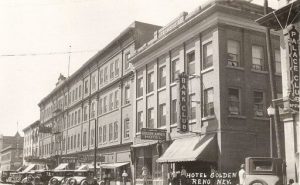 A thug’s confrontation of a casino owner on October 30, 1944 radically altered both of their lives.

Andrew Jackson “Jack” Blackman, co-proprietor of the Town House gambling saloon* in Reno, left his business for the night at about 2:30 a.m. and went into the Bank Club** to see his good friend, Walter Parman, the manager.

As Blackman, 32, was passing them, Lannigan, 39, said to him, “Come here. I want to see you.” When Blackman replied he was busy and kept moving, his summoner grabbed him by the sleeve and yanked him toward him.

“Am I coming across or not?” Lannigan queried, in other words asking whether Blackman was going to give him the money he wanted. “Are you trying to high hat me?”

“I’ll kill you,” Lannigan said, among other threats.  He reached into one pocket, then another, and slugged Blackman in the face while saying, “You’re gonna come over.”

A stunned and reeling Blackman pulled his .38-caliber Colt revolver and shot at Lannigan five times. Two of the bullets hit him in the stomach; the other three went into the bar counter.

When the gunfire began, most of the casino patrons hit the floor and stayed there until it was safe to move.

Olsen and Hilliard took the gun from Blackman, who was bleeding profusely from his nose. In the meantime, Lannigan ran out the door and dropped, face down, just outside the club. In the ambulance Lannigan “called out vile epithets several times,” according to police (Nevada State Journal, April 14, 1945).

The Dire Consequences
In the Washoe General Hospital emergency room, when the night nurse supervisor was preparing Lannigan for a blood transfusion, Hilliard appeared and approached her patient, getting in her way. She asked him to leave but he only did so after taking something out of the injured’s pocket.

About a half-hour later, Lannigan succumbed to internal hemorrhaging. The death shot had been the second one, which had entered the body just below the twelfth rib, had traversed upward through the chest, puncturing the liver, abdomen, heart and lungs, and had lodged under his left armpit.

Two police officers arrived on the scene at the Bank Club. Blackman asked them to take him away before Lannigan’s fellow thugs killed him. On the ride to the police station, Blackman, whose nose then was flattened with a jagged cut on it, asked if Lannigan was dead. Upon hearing the answer, “No, not yet,” Blackman said, “I hope he dies, or he’ll get me.” Later, Blackman would say he didn’t remember that conversation.

Soon after, Blackman was dazed and groggy from “a blow of sufficient force to cause a ‘pretty severe’ brain concussion, a doctor said. Although under arrest on the investigation of murder, he also was transported to Washoe General, where he underwent surgery on his nose, which had been fractured into many parts (Reno Evening Gazette, April 13, 1945). Subsequently, Blackman reacted negatively to the sulfa in the nose drops used to treat him and, consequently, remained an inpatient for two weeks.

Following his arrest, he sold his interest in the Town House.

A Repeat Offender
For several months, Lannigan had been attempting to shake down Blackman for money — for “protection” and to fund the impending court case of a fellow gangster (Nevada State Journal, October 1, 1944).

Blackman first had met Lannigan at the Ta-Neva-Ho at Lake Tahoe, where the former managed the gambling games, in 1937. That was when Lannigan had started pressing him for cash. Blackman said that “Lannigan seemed to hound him whenever they met” (Nevada State Journal, April 14, 1945).

While living in Los Angeles, Lannigan had asked Blackman for money to cover bond and an attorney, and even did so in person at Blackman’s business, the Town House, the last time having been two or three weeks before the shooting.

Each time, Lannigan reportedly had made such comments as, “I’ll rub you out,” “If you don’t come across, I’ll take a crack at you,” “I’ve done stretches in San Quentin and Folsom and didn’t like it, but wouldn’t mind doing more to get you” and “If you holler to the police, you’ll be like a cake of ice.” Blackman, however, had always refused.

In fear for his life, he’d applied for a gun permit, to no avail (nobody had successfully gotten one in 1944) and he’d carried a firearm anyway, especially when he’d transported money from the Town House to the bank. Also, confidant Parman had followed Blackman, who’d had a bum leg since a fall during childhood which had caused the military to deem him unfit for service, home each night in his car to ensure his safety.

Having killed Lannigan, Blackman faced a trial and a potential prison sentence.

* The Town House was located at 39 W. First Street.