Catching an Impromptu Show in Vegas 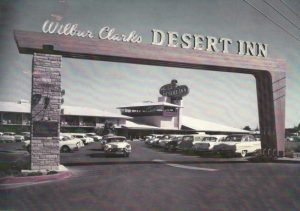 Tourists Robert and Lola McDurmon may or may not have been in the wrong place at the wrong time, depending on how you look at it.

After taking in four shows on the Las Vegas Strip, the couple from Oxnard, California unwittingly witnessed a crime drama unfold up close. After pulling into the parking lot of their hotel, the Desert Inn, at about 5:30 a.m. to call it a night, a shootout involving a lone man and two law enforcement officers ensued about 20 feet away.

The two were in Sin City in March on a trip Robert had earned for having sold a significant number of Ford autos at work — Moffett Ford in Santa Paula — the previous month.

What Witnesses Didn’t Know
Before the volley of gunshots, Robert Vincent Carter, 47-year-old unemployed accountant, had been imbibing liquid spirits at the Desert Inn’s Sky Room bar. He got into a heated argument with a businessman — Stewart Hollingshead, an executive with the R.M. Hollingshead Company, a New Jersey-based manufacturer.  Because Carter’s language was expletive filled, he was tossed out of the hotel-casino. He drove home, retrieved his 0.350 Magnum pistol and returned to the Desert Inn.

Once there, he grabbed the casino pit boss, Sonny Burnett, and, at gunpoint, forced him outside the building. At that moment, another hotel guest, businessman and friend of Hollingshead, Harold Shafer, was about to enter. Carter snatched him and released Burnett.

“I’m giving you 60 seconds to get that other guy out here,” Carter told Burnett, meaning he wanted him to retrieve the man who had Carter ejected from the property earlier. Burnett went inside.

With his pistol targeted on him, Carter maneuvered Shafer to a car near the hotel entrance and pushed him into the front passenger seat. Carter then got in on the opposite side. While that was happening, sheriff’s detectives, Hiram Powell and Don Peel, appeared on the scene.

Instead of complying, Carter threw open his car door and fired a shot that sailed past one of Peel’s ears. The police duo responded with eight bursts, one bullet hitting Carter in the right temple.

During the fray, Shafer ducked and ran to safety.

Carter was transported to Southern Nevada Memorial Hospital and charged with two counts of kidnapping. Though his condition was critical, he survived.

In September, Carter pleaded guilty to a lesser charge of false imprisonment. He was convicted and sentenced, but it’s unknown what punishment he received.

Possible Triggers
What had set Carter off?

Carter and his wife, who worked as a cashier at the Desert Inn casino, had been having marital problems and, in the recent past, had been separated on and off, though they were together at the time of the crime. Leypoldt further speculated that the potent amphetamine, Benzedrine, which officers found in his car, together with alcohol may have helped cause Carter to “blow his top.”

An Unforgettable Trip
As for the McDurmons, they had quite the story to tell upon returning home. And tell they did, at least to the local newspaper, the Oxnard Press-Courier.