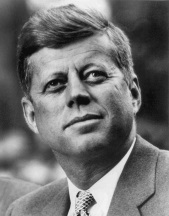 On the Monday after then President John F. Kennedy was assassinated, Las Vegas casinos went dark for 17 hours, from 7 a.m. to midnight, in his honor. Along with the gaming rooms in all of the major downtown and Strip hotels, showrooms and bars closed, too.

Despite gambling being unavailable, many people flocked to the mecca anyway.