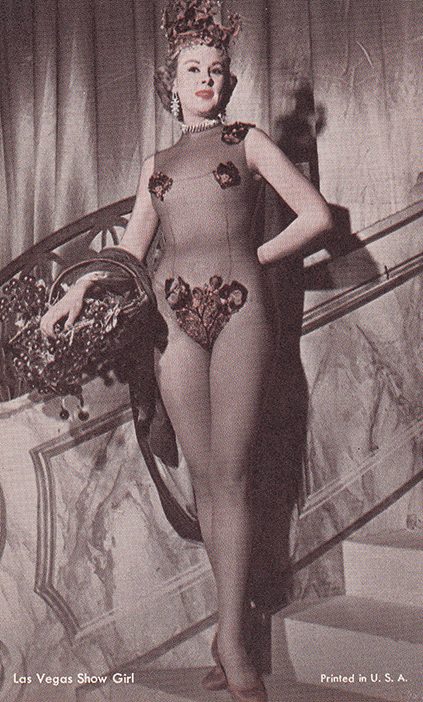 The debut of topless showgirls in Las Vegas roused disapproval — not surprising given it occurred early in the Leave it to Beaver era.

The Stardust was the first to abandon bras and tops, doing so when it unveiled a show featuring the Bluebell Girls for the hotel-casino’s 1958 grand opening on The Strip. Other casinos soon followed suit, leading to an outcry from a Nevada-based Catholic Bishop, Robert J. Dwyer.

Dwyer condemned such shows as “filth,” a “flouting of morality” and a threat to “the public decency of our commonwealth.” Via letter, he clarified to all Nevada priests that no Catholic, resident or tourist, “is permitted to be a spectator of such entertainment” as doing so constituted a sin and “there is no vacation from the Ten Commandments” (Reno Evening Gazette, July 6, 1961).

In response to this flak, some properties, like the Dunes, vowed to continue their risqué shows because the public enjoyed them whereas others, such as the El Rancho Vegas, instructed their performers to cover up.

“If nothing is done to correct the situation, the state may well find itself in the position of a moral leper, and leprosy demands drastic treatment,” he said (Reno Evening Gazette, July 6, 1961).

The newly formed Nevada Gaming Commission, in its first meeting, in 1961, raised the controversial subject. The members doubted gambling regulation extended to showgirls’ exposed breasts so they referred the matter to Nevada Attorney General Roger Foley.

Foley volleyed back with an opinion the commissioners likely didn’t want to hear, that the agency holds the power to ban casino shows involving nudity. Governor Grant Sawyer approved of Foley’s determination. For whatever reasons, though, decades of commissioners since have let bare bosoms be.