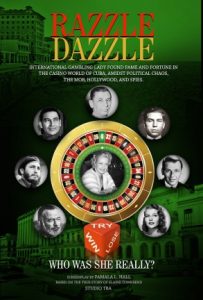 Despite New York mobsters trying to scare her off, an ambitious woman — Elaine Townsend (née Margaret Helgeson) — held her own as a gambling operator in the late 1940s. Bright, young and gorgeous, she parlayed her chutzpah, commerce degree and drive into making gobs of money in Cuba.

Big Screen Worthy
Her exploits in Havana among gangsters, politicians, movie stars and secret agents were so compelling that Lucille Ball and Desi Arnaz planned to make a movie about them with Ball in the lead role but never did. However, a different film about Townsend — Razzle Dazzle: The Elaine Townsend Story — is slated for release on Aug. 1, 2018.

Entrepreneurial Endeavor
The Wyoming-born go-getter traveled to the Caribbean island early in 1947, at age 27.

“I’d heard Cuba was the spot for free enterprise — and I was as determined as ever to make a lot of money,” said Townsend, the daughter of a cattle rancher who’d grown up poor (The American Weekly, Sept. 5, 1948).

Once there, she heard the gambling concession at the Gran Casino Nacional, Cuba’s only legalized gaming spot at the time, was being sold for the upcoming season. Soon after, the tall blonde learned it only had been awarded to the New York Mafia in previous years. She consulted some attorneys who told her women didn’t run games in their country.

None of that deterred her, however, and she bid on the enterprise.

After negotiating for months with officials, Townsend bought the dice and chemin de fer (a variant of baccarat) operations for $30,000 ($329,000 today). She opened them in July, four months before the New York gamblers typically did.

The Confrontation
She soon found herself face to face with three of those very men from The Big Apple in the Gran Casino.

“We heard you grabbed off the dice and chemmy gimmicks here,” one of them said (The American Weekly, Sept. 5, 1948). “We came down, hoping to grab them off ourselves, and this Cuban guy says, ‘Miss Townsend got them. They’re all hers. They’re not for sale.’ We thought maybe it was a gag. It isn’t true, is it?”

When she confirmed that it was, another of the trio told her the players would “clean her out in a week.”

“What you want to do it for, honey?” the first man asked. “It’s not your racket. You got … well, you got class. You ought to be home or someplace.”

“I don’t want to go home. I want to make a lot of money,” Townsend said.

“I’m sorry, gentlemen, but I’ve gone through a lot of anxiety over this thing. I’ve got to be repaid for that. And so far it’s been fun. I like it. I’m going to stick with it.”

The La Cosa Nostra representatives left her alone after that.

Never having worked in gambling before, Townsend hired New Yorker Connie Immerman, not a mobster, to run the games under her watch, as he’d run them years earlier. Most recently, Immerman, with two of his brothers, had co-owned and run Connie’s Inn, a Harlem night club from 1923 to 1934, when the Depression caused them to close it.

In Havana, Townsend went on to own an interest in the Jockey Club casino and operate the games at the Montmartre after Fulgencio Batista, who usurped the Cuban presidency by coup in 1952, legalized gambling in hotels, clubs and cabarets in 1954.

Amassing Cash
Before entering the gambling industry, Townsend had toiled to earn, save and invest her money. After working her way through and graduating from the University of Denver in Colorado at age 19, she worked, often simultaneously, an assortment of jobs — teaching, selling real estate and modeling.

In 1940, at 20 years old, she visited friends in Honolulu and, after seeing the potential to make money there, she stayed. First, she ran a photo studio. Then, with the start of World War II, she opened a chain of hot dog stands, to which she eventually added a costume jewelry counter. She also bought the pool table concession in an arcade. With her income, she played the stock market … successfully.

Subsequently, she investigated business opportunities in Mexico but, instead, wound up in Cuba, just seven years after her first entrepreneurial effort.