Vegas Casino Welshes on Paying Out 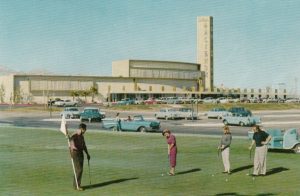 Rooms at this hotel-casino were $10 a night and, the golf course was lit at night.

The Hacienda in Las Vegas, Nevada held an ongoing promotional contest at its golf course, which was widely advertised, even on the back of the postcard above. Participants would pay 50 cents (about $4.25 today) per attempt at a hole-in-one from 165 yards away, and the casino would award $5,000 ($43,000 today) to anyone who accomplished it.

Beating the Odds
The chance of someone making a golf ace depends on their skill and the difficulty of the hole, according to the National Hole in One Association. Roughly speaking, though, these are the odds for achieving such a feat for players of different skill levels:

On Wednesday, March 12, 1958, with an entourage present, George Gibson, a local resident and commercial pilot, paid the entry fee and allegedly landed an ace. Yet the Hacienda, 1.5 years old at the time, didn’t give him the prize.

Chance v. Skill
At the trial, the Hacienda defense argued and cited state law to support that gambling debts weren’t collectible in Nevada courts and, therefore, the casino wasn’t liable for the $5,000. (It was true that individuals or companies owed, whether a casino or a player, couldn’t use the legal system to recoup such monies.)

In response, the plaintiff’s representation conversely purported that the $5,000 didn’t constitute a gambling debt. This was because what Gibson had participated in hadn’t been a game of chance but, rather, a game of skill. A golf professional testified on Gibson’s behalf that yes, luck was involved in making a hole-in-one, but “a skilled player will get (the ball) in the area where luck will take over more often than an unskilled player [will]” (Nevada State Journal, Feb. 2, 1961).

District Judge A.S. Henderson ruled the Hacienda had to pay Gibson. He determined the hole-in-one contest was in fact a game of skill and as such, the money owed to Gibson wasn’t gambling related.

The casino appealed that verdict, and the Nevada Supreme Court heard the case three years later, in February 1961. That body affirmed the lower court’s ruling and ordered the Hacienda to pay Gibson the $5,000 plus interest and court costs.

Change of Tune
When the Associated Press reported the outcome of the appeal, the Hacienda’s general manager gave its newsperson a different reason for having not paid Gibson, that his company couldn’t verify the contestant landed an ace.

“The hole in one was made under odd circumstances,” said Norman Yoshpa. “It wasn’t witnessed by an authorized person” (Arizona Republic, Feb. 5, 1961).

Yospha explained that a hotel gift shop employee was supposed to have watched Gibson try for the win, but she got called to the phone just as he was about to swing. She told him to wait then left for the building. Yet when she returned to the green, he claimed he’d made the shot.

What had really happened? Had Gibson made the hole-in-one or had he fabricated that he had? Or had the Hacienda planned all along to not pay any winners? Or had extenuating circumstances in Gibson’s case, as suggested by Yoshpa, been the true reason for the company withholding the five grand? What do you think?