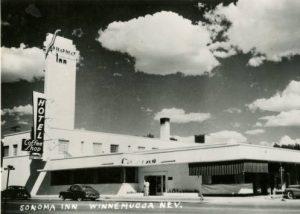 The Sonoma Inn hotel-casino debuted on May 27, 1947 at 185 W. Winnemucca Boulevard in Winnemucca in Northwestern Nevada, about halfway between Reno and Wells, likely named after the nearby Sonoma Range mountains. In 1969, the property was remodeled and renamed the Winners Inn and Casino, which is open still today.

Ad from the Nevada State Journal dated May 25, 1947
Photo from the University of Nevada, Reno’s Special Collections