When customer Mrs. Curt Whitney entered the Nevada Club at 3 a.m. on a Sunday in May 1953, her shoe allegedly got caught in a hole in the floor, and she fell.

More than a year later, she and her husband sued the casino. She sought $35,000 in damages for injuries to her right leg and back and having been hospitalized at various times for a total of seven weeks. Her husband sued for $12,812.05 for medical and household expenses and — get this — loss of his wife’s companionship.

This is one example of the accident liability lawsuits that became common after Nevada legalized gambling in 1931. Here are three more cases, all filed in Reno in 1954:

• Antonio Rodriguez was playing the card game, panguingue, in a gambling club when he allegedly stepped on a beer bottle while rising from his chair and, consequently, broke his ankle.

He sought $5,000 in general damages and $1,400 in special damages for medical expenses and lost wages. 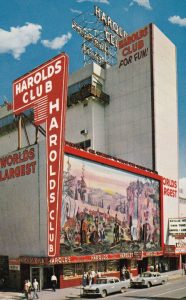 • Mrs. Lillian Walker was stepping onto the escalator in Harolds Club to descend from the second to first floors when her shoe allegedly got caught and she wobbled.

An alert casino employee grabbed her to keep her from falling, injuring her back and limbs, she and her husband claimed in their subsequent lawsuit. She demanded $35,000 for bodily pain and nervous shock; her husband asked for $2,250 for medical expenses and compensation for the injury of his wife.

She and her husband sued, claiming management had failed to keep the stairs safe. She asked for $35,000 for her injuries; her husband requested medical expenses.

While these incidents truly may have happened, it’s interesting that most occurred in the city’s major gambling clubs and not the rinky dink ones.