The Wanted Man of Mystery

The man who played roulette in the Palace Club nearly every day for six months was noticeable for his suave appearance. Henry Helmut, age 47, had a bit of gray hair and sported a tasteful, waxed moustache, Pince Nez glasses with ribbon and sharp, tailored attire.

“He looked like a college professor out on a gay holiday and gambling club operators say he ‘was the most impressive piece of scenery’ they have had around in a long time,” reported the United Press (The Amarillo Sunday News-Globe, Dec. 7, 1941).

Eventful Work Shift
On Friday night, December 5, while Helmut was on the job, shilling for the Reno, Nevada casino, police officers arrested then turned him over to federal agents who’d flown in from San Francisco and New York. Helmut’s capture marked the end of a 1.5-year search for him that required 37,000 travel miles through the U.S., Canada and Mexico. 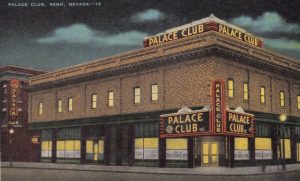 Helmut was wanted on a secret indictment in New York for conspiracy against the United States with international ramifications, the feds said.

The name Henry Helmut was one of 40 different aliases — including Paul Laval, Dr. Hoffman and Martin Helmuth — the dapper man had used. His actual name was Helmuth Hartmann.

On a search of Hartmann’s Reno hotel room, police found an unloaded Mauser firearm, about $350 in bills in the lining of his suitcase, gold ore and letters written in German.

Was he a German spy? Was he a drug trafficker? Was he involved in a counterfeit ring? Was he a Nazi?

The feds wouldn’t say, but they extradited Hartmann to The Big Apple to face trial.

Filling in the Portrait
More information about Hartmann later came to light. He’d been born in Germany but since had obtained American citizenship. He was associated with a New York gang. In fact, Reno Detective Captain Harry Fletcher surmised that Hartmann had been casing the local casinos on behalf of his East Coast colleagues who wanted to get into the business. The gambling club booster’s lavish spending around town on a 50 cents-an-hour income made Fletcher suspicious.

Hartmann had been an international racketeer and swindler (stock and matrimonial cons, for example), and had served time in prison. He’d been an associate of 1) Victor “Count” Von Lustig (an alias), the U.S.-based mastermind of an extensive counterfeit operation that law enforcement dismantled in 1935 and 2) Miroslav Skrivanek, a widely known narcotics trafficker in Czechoslovakia.

Recent Unlawful Activity
Hartmann had been apprehended in Reno for his involvement in an extensive conspiracy to smuggle drugs from Mexico and distribute them in New York City. The specific charges against him were conspiring to import, distribute, conceal and transport narcotics.

He’d acted as the liaison between Mafiosi in East Harlem — the 107th Street Mob — and opiate sellers south of the United States border. In doing so, he’d arranged for New York mobsters — Frank Livorsi, Dominick “The Gap” Petrilli and Salvatore “Tom Mix” Santoro, all with long records of violent crimes, from rape to homicide — to obtain a continuous supply of narcotics from Mexico. He’d accompanied these dealers on a drug buy, at least once, in summer 1940.

“The boys now have enough money to buy all the narcotics you can find in Mexico,” Livorsi had told Hartmann. “Do a good job for us” (Advisory Committee, Feb. 16, 1946).

Punitive Consequences
Once in federal custody, Hartmann divulged what he knew about the narcotics operations and fingered numerous accomplices. This led to a second indictment, in which he also was named, in Arizona, the state through which the drugs entered the U.S.

Hartmann was found guilty in both the Arizona (May 1942) and New York (July 1942) trials. In each, he was given a suspended sentence of two years’ prison time, with probation.