The Duel at Big Hat 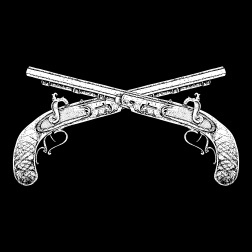 Arthur T. Morgan belligerently stormed into the Big Hat casino on Highway 91 (outside Las Vegas, Nevada) at about 1:30 a.m. on a Friday night in spring. He immediately began heckling, threatening to shoot and goading the proprietor, Sam Baker, into a gunfight.

Baker had moved to Las Vegas from Chicago and purchased the Big Hat in spring of 1947. Prior to that, he’d been a politician in the Windy City under William “Big Bill” Hale Thompson, one of America’s most corrupt mayors. Further back, he was involved in minor gambling activities in Albuquerque and Shreveport, Louisiana.

Morgan, who’d been picking fights elsewhere in the Las Vegas area in the previous 24 hours, had opened and sold a nightclub west of Albuquerque years earlier. At the time he was in Las Vegas (only for a few days), he owned both a home and a package liquor store in New Mexico, and allegedly was ill with an unknown ailment.

The two were acquaintances from Albuquerque, where they’d gotten into “trouble with a woman,” said Clark County Sheriff Glen Jones, based on reports from New Mexico (Nevada State Journal, March 27, 1948).

The Feud Escalates
On the night of the confrontation, Morgan continued trash talking for two hours, with Baker trying to calm him.

Suddenly, at 3:57 a.m., both men drew their weapons, bullets flew and Morgan fell, never having gotten off a shot. Hit five times, his dead body lay sprawled on the casino floor, his .380 Beretta automatic at his side, his feet pointing toward the bar.

“I beat him to it,” Baker later told police.

The half-dozen or so witnesses to the taunting denied seeing the shooting take place.

Baker informed police officers he’d shot Morgan in self-defense but refused to discuss his prior relationship with the man or his own background. He was booked for investigation then released on $5,000 cash bond.

The subsequent inquest into the shooting found Baker’s claim to be valid. He only was charged with carrying a concealed weapon and fined $50 ($494 today) for that offense.

Consequently, the state tax commission pulled his gambling license, in September, without which he couldn’t turn a profit, he said. Instead, he ran the place as the Villa Venice, a restaurant without a casino.