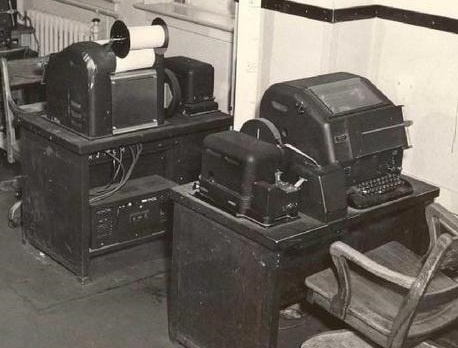 The problem was that bookmaking, pool selling (the selling or distribution of chances in a betting pool) and dissemination of horse race data were against Nevada law. All gross misdemeanors, each carried a penalty of a $500 to $1,000 fine ($9,000 to $18,000 today), imprisonment of one to six months or both. Betting on horse races held in Nevada, however, was legal.

1) Data from the East Coast were teletyped to the Bank Club, which then phoned them to the WPC. From there, they were forwarded to 900 bookmaking/pool selling places in Nevada, California and Washington.

2) Data from the West Coast were teletyped to the WNC, which passed them on to the Bank Club and Reno’s Palace Club. The flow then continued from the Bank Club as with the East Coast info.

Sullivan (né John D. Scarlett) was the Bank Club manager and co-owner with mobsters William “Bill/Curly” J. Graham and James “Jim/Cinch” C. McKay, who were serving time in the U.S. Penitentiary, Leavenworth in Kansas at the time for conspiracy and using the U.S. mail to perpetrate fraud. Poncia was the casino’s book operator. The other defendants were linked to the WPC and WNC.

Brown also had phone service to the three entities disconnected and ordered the Bank and Palace Clubs to cease bookmaking immediately due to it being a public nuisance. The gambling houses complied.

The D.A. clarified that the county’s efforts in this regard were to “‘clean up’ a condition which gave Reno a bad name throughout the West,” not to quell horse race wagering, reported the Nevada State Journal (Dec. 2, 1940).

Revisions of Gambling Law
Roughly a year later, in April 1941, the Nevada Legislature legalized both bookmaking and betting on horse races occurring outside of the state. Once that occurred, the Bank and Palace Clubs restarted their bookmaking operations. Distributing horse race information, however, remained illegal.

The Defendants’ Fate
Later in the month, a hearing took place on the demurrer and motion to dismiss the charges against Sullivan and Poncia filed by their attorneys, George B. Thatcher and William Forman. (A demurrer is a response in a court proceeding in which the defendant acknowledges the truth of the allegation but claims it isn’t sufficient as a cause of legal action.)

• the facts didn’t constitute a public offense
• the alleged offense fell outside the jurisdiction of Nevada’s Second Judicial District Court
• the horse race info law was unconstitutional in that it encompassed a topic not in the title
• the same law interfered with the freedoms of speech and the press.

Brown countered all of the defense’s points. He requested the judge overrule the demurrer and a preliminary hearing scheduled. Forman then responded to Brown’s arguments.

Six days later, Curler delivered his ruling. He ordered the charge against the two men and Bank Club Inc. be dismissed and the bond they’d paid returned.

* A teletypewriter, teletype for short, was a character printer connected to a telegraph. Teletype also was a brand of teletypewriter.

** Teleflash was the brand name for a system that provided radio-type broadcast programming to commercial entities via telephone lines versus airwaves.