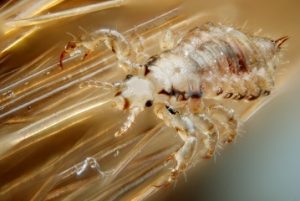 To amuse themselves, some miners — California ones, as reported in this case — staged lice fights and waged large sums on the outcome.

They placed two Pediculus humanus face to face on a level surface and nudged them forward until their heads touched. Then the battle was on.

“Through their large magnifying lenses, the men would watch the combat with intense interest. The insects would often fight with great ferocity, lunging at each other with their tusks, biting off legs, rearing up on end, and displaying throughout the most desperate valor. The struggle would only end with the death of one or both of the gladiators,” reported the Reno Evening Gazette (Feb. 5, 1880).