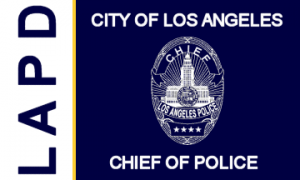 In fall 1886, Officer John L. Fonck confronted one of his superiors face to face. He charged Chief of Police J.W. Davis with “standing in with the gamblers,” in other words, allowing them to operate their illegal casinos unfettered (Los Angeles Times, Dec. 8, 1886). California had banned gaming 26 years earlier.

In response, Davis suspended him for insubordination. When Fonck subsequently asked the police commissioners to reinstate him, they fired him instead.

The unemployed officer then took his allegations against Davis to the Los Angeles Times, which published them.

Chief Publicly Outed
Consequently, the Los Angeles City Council members held a special meeting to investigate. During this proceeding in which attorneys were disallowed, Fonck presented a case, gave a statement and questioned witnesses.

He depicted a scenario in which Davis:

Soon after Davis took office, in December 1885, Captain of Police C.A. Ketlar told Fonck that he (Ketlar) and Chief Davis “let them play and pay,” referring to the Chinese gamblers, and that everyone could benefit from the arrangement. The next day, Davis informed Fonck he only objected to non-Chinese people playing games of chance. Other times, various gambling club owners scoffed at Fonck’s power because the chief was “with them” (Los Angeles Herald, Nov, 14, 1886).

Fonck detailed several other situations and circumstances to prove that Davis knew gambling was happening and where. For instance, one of the chief’s rules was that no officer could raid any casino without his prior consent.

Davis, when questioned, denied all accusations and often answered he didn’t recall specific conversations and instances between him and Fonck.

“These witnesses made a sorry failure of their attempt to break down Fonck’s character. It was a noticeable feature throughout the investigation that not one of the witnesses against him could look, or tried to look, the honest old Dutchman in the eye,” reported the Los Angeles Times (Dec. 8, 1886).

The Smoking Affidavit
In early December, the Times published a statement it had held for three weeks, until after the city election. In it, fellow police officer Herbert Benedict swore to interactions with Davis that depicted his true character. Benedict came forward, not because he and Fonck were close but because he viewed him as a solid officer and believed Fonck’s job loss and Davis’ vindication had been unjust.

Benedict explained Davis had used him as a middleman to communicate with Fonck. Davis had instructed Benedict to tell Fonck that Davis would reimburse all of his lost salary since his firing if Fonck would drop the charges against him. When Fonck had refused, Davis had had Benedict try again, that time offering $100 and the promise of $200 more if Fonck would “make the evidence as light as possible” (Los Angeles Times, Dec. 8, 1886).

When council members subsequently asked Davis about the $300 bribe, he tried to explain it away by telling a convoluted story involving former chiefs and their wrongdoings.

Weak, Not Depraved
The next day, Davis resigned.

“My reasons are that I am unjustly accused or blamed for an act of mine which was done without any willful or malicious motive, and solely to benefit another person; but circumstances are such that I am without witnesses to demonstrate the truth of my assertion, and I therefore prefer to resign at, once, though perfectly conscious in my own mind, that I am innocent of any wrong, illegal or improper act, were the whole facts known,” he said (Los Angeles Herald, Dec. 9, 1886).

Subsequently, no one pursued holding him accountable for his alleged misconduct.

“Chief Davis’ troubles have arisen, it is believed, rather from weakness than from innate depravity, and there was no disposition to hound him down,” noted the Los Angeles Times (Dec. 9, 1886).

The council chose Ketlar to step in as chief until it voted in someone new.

As for Fonck, as opined in the same article, “The events of yesterday, however, vindicated his position, and palpable justice demands that he be reinstated, with pay for the time he has lost. That is a proposition which admits of no argument.”