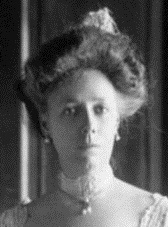 William Howard Taft (not yet the U.S. president) was in Manila, the Philippines on Secretary of War duties. His wife, Helen, or “Nellie,“ who’d accompanied him on the trip, was at a Saturday morning bridge whist party as the guest of honor. Apparently, the ladies were doing some betting on the games.

During the fête, the hostess received a call from local police, who’d been on an anti-gambling crusade. They told her they’d enforce the law against playing games for prizes or money.

Thus, the women curtailed the bridge.