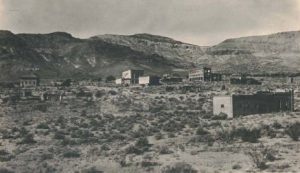 Johnny-Behind-the-Gat bet more than he should’ve.

He was a prospector and miner said to have little common sense, a big temper and a penchant for using his weapon to solve disputes.

John Cyty (his real name), in a 12-hour roulette game, bet and lost $75,000 worth of shares (a roughly $2 million value today) of his company, the Big Bell Mine Company in Death Valley, California. In doing so, he ceded control of the business to C.E. Jones, the owner of the Stock Exchange gambling rooms in Rhyolite, Nevada, just across the border from the mine.