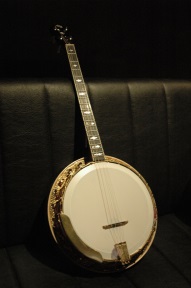 While doing time at Alcatraz, Alphonse “Scarface” Capone, infamous Chicago organized crime boss heavily involved in gambling, played the banjo and mandola (a large mandolin) in the prison band, The Rock Islanders, a rotating group of musicians who performed for the other inmates every Sunday. He also composed music.

A few wax versions of banjo-strumming Capone in his cell on The Rock are on display at Madame Tussauds in San Francisco, California.

Photo from freeimages.com: by Dave Gilligan