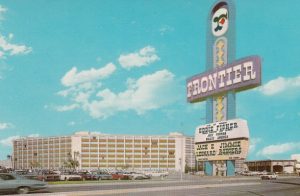 A couple and a third man approached a 21 table in the Frontier in Las Vegas, Nevada on a Monday afternoon. The husband, Douglas Anderson, distracted the dealer.

In that moment, his wife, Beverly Hanson, pulled a marked deck from her purse, handed it to the other man, Fred Padilla, who swapped it for one of the sets to be used. Hanson put the real house deck in her bag.

Officers from the Clark County Sheriff’s Office’s intelligence division, who quickly appeared at the table, arrested Anderson and Padilla and confiscated Anderson’s chips and bills, which, at that time, totaled $5,300.

The dealer, T.J. Underwood, had been in on the cheat … and the bust.

Prearranging on Both Sides
Two weeks earlier, Keith Hense, a Las Vegan unknown to Underwood, had recruited him to participate in the theft for a cut of $5,000 ($36,000 today). The goal was to steal $60,000 ($430,000 today) in all after switching four stacked card decks for the house ones. At a subsequent tête-a-tête, Hense introduced Underwood to Anderson, a card shark and the ringleader, and Bob Parmane, another Vegas resident. “Look, we love money, and we hope you do, too,” Anderson told Underwood.

The dealer informed his boss about the plot, and casino security got involved. After Underwood agreed to help them catch the perpetrators in the act, they had him arrange a third meeting. That took place at the apartment of Frontier boxman Robert Moses Johns, who provided the casino’s blue monogrammed playing cards for the swindle.

End of the Road
When the cheat took place, on March 11, undercover agents and sheriff’s deputies, who’d been milling about, heard it go down, through a wire Underwood wore. Cameras, which the security team had trained on the area, captured it on tape.

Anderson and Padilla, from California, and Hanson, from Utah, were booked on charges of obtaining money under false pretenses, grand larceny, swindling and bunco steering. Hense, Parmane (aka Robert Carl Underwood, no relation to T.J.)  and Las Vegas resident, Alan Samuels, whose role was to perform a sleight of hand to cover the crime, were booked on charges of embezzlement and conspiracy to commit grand larceny.

The Frontier pressed charges against the alleged cheaters, an unusual move in that casinos tended to deal with such individuals themselves.

Hand ‘Em Over to The Law
Nevada gaming regulators, in August of that year, publicly announced that in a policy shift, they now were encouraging gambling houses to prosecute cheaters to keep them out of the state’s casinos. They used as an example Howard Hughes, earlier that year, turning over to law enforcement the Frontier cheating suspects.

Roughly $5 to 8 million (about $36 to 57 million today) are filched each year from Nevada’s casinos by crossroaders, which results in The Silver State losing about $400,000 ($2.9 million today) in tax revenue, noted Frank Johnson, Nevada Gaming Control Board chairman.

“The idea is that the clubs don’t catch the cheater and then send him across the street to cheat somebody else,” Johnson said. “This is a step towards getting him out of circulation.”

Test of the New Policy
Justice of the Peace Herman Fisher, Jr. ordered all six accused in the Frontier incident to stand trial on various revised charges. The videotape, the supposed smoking gun in the case, turned out to be not so helpful, as it showed a “pretty bad picture,” in Fisher’s words. Despite the quality, he allowed it to be introduced in court. The prosecution also used T.J. Underwood as a witness.

It’s presumed that eventually the district attorney’s office also terminated the cases against Anderson, Hanson and Padilla; no accounts of actual trials, convictions or sentencing could be found in the press after April 1971.