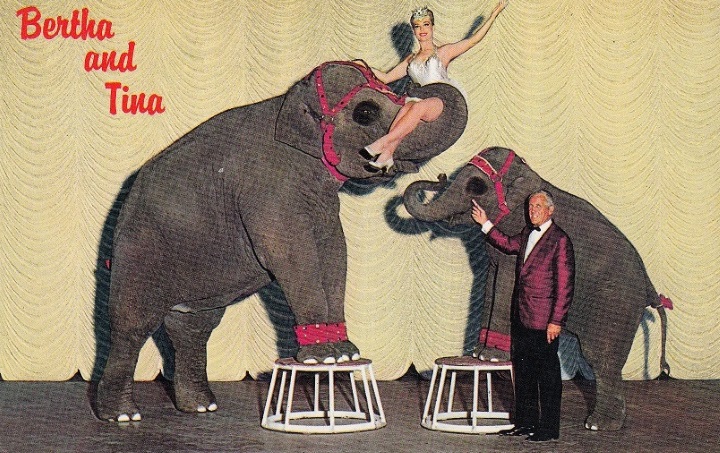 You’ve likely heard of Dumbo, Horton and Babar, but what about Bertha?

Real, unlike the others, Bertha is an elephant renowned for having performed in shows at the Nugget hotel-casino, in Sparks, Nevada, for 38 years! Former Nugget owner, John Ascuaga, bought Bertha in 1962 for $8,000 (that’s $63,000 in today’s dollars) from a Wisconsin circus museum and, soon after, had the 17 year old appear on stage for opening night of the showroom Circus Room and regularly thereafter.

“Bertha is really super. She’s so gentle and very intelligent. We do a trick where she lays on top of me. She is so careful that I’m not afraid at all,” said Diane Gustin, who performed with her (Nevada State Journal, July 20, 1975). “She is one in a million. She has a fine temperament.”

This Asian star often performed with a stunning female and, over the years, with a younger elephant sidekick, first Tina, then Angel. Once, she carried to the stage Liberace who was bedecked in a $100,000 costume. She also did her act at local elementary schools. In 1973, Ascuaga awarded Bertha with a 10-year pin and inclusion into the prestigious Nugget employee Hall of Fame; she celebrated by consuming an extra hay bale.

Bertha lived in a barn adjacent to the Nugget, a $75,000 facility equipped with water, electricity, heat and an outdoor exercise yard. Her trainers lived in an apartment above it.

Her beauty and hygiene regimen read like a spa menu. During the summers, peak performance season, Bertha’s trainer bathed her and exfoliated her skin (with fine sandpaper) daily to keep her soft and smelling good. He cut her hair every six to eight weeks with … a blowtorch. And he routinely trimmed her toenails and cuticles. In the winter, when she didn’t perform because the showroom was closed, she basked in a total body, pore-clearing oil treatment that remained on her skin for four weeks.

The entertainment icon retired in October 1999 and died a month later at age 48.