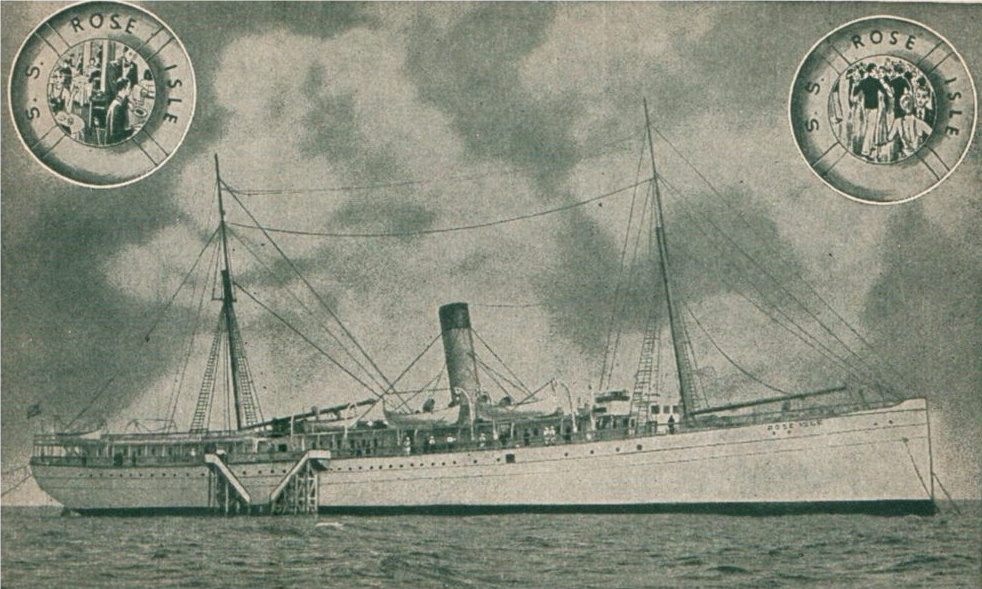 “There are no dull moments on the Rose Isle,” the invitation to prospective customers for dinner and dancing on the Southern California gambling ship read. Apparently, the excitement also included murder.

The Crime and The Ship
Alerted to trouble by the ship’s bulldogs Toots and Boots at around 2 a.m. on a Tuesday, a deck hand discovered craps dealer Charles M. Bozeman, 32, dead on a cabin floor, having been shot twice, below the heart and in the arm. Also in the cabin of steward A.C. “Duke” Pohl were café bus boy, Virgil Roach, 32, and casino floorman, James Lee O’Keefe, alive and drunk. An automatic revolver lay near the body (later it was discovered it’d been stolen the previous December in a robbery), and two bullets were lodged in the wall. Bozeman, Roach, O’Keefe and Pohl all were racketeers from East St. Louis, Illinois.

The Rose Isle was one of numerous boats that offered gambling offshore the West Coast during the 1930s. To skirt the state law that prohibited most forms of gambling, these vessels had to be anchored in federal waters, which were at least three miles out from the shoreline. This particular ship sat on “gambler’s row” off of Long Beach, between the Johanna Smith and the Monte Carlo.

FBI agents investing the murder learned that earlier that day, July 19, 1932, Bozeman and O’Keefe had gone fishing together and after returning, had done some drinking with Roach in the cabin.

Roach fingered O’Keefe as the shooter and said the murder resulted from a quarrel over a married woman. However, both of these claims would come into question at O’Keefe’s trial in December 1932.  O’Keefe was booked into the Long Beach Jail and charged with Bozeman’s murder. Roach was held in the Los Angeles County Jail as a material witness.

Subsequent Mysterious Crimes
Later that Tuesday, in the evening, another East St. Louisan, John Miley, 36, also was shot to death while fleeing from a robbery he and his underlings had committed at the Lexington Pharmacy in Long Beach. For the theft of about $125 (about $2,300 today), police arrested and charged four suspects: Ed Allen aka Al Reed, 25; John Teeter, 33; Verner Hansen, 20; and Joe Aycoy, 26.

Allen revealed that he, Miley the leader and the others had held up 40 or more drugstores and gas stations over the preceding several months. He said Bozeman fenced the stolen goods for Miley’s group and that Bozeman had $15,000 worth of diamonds (about $281,000 today) in his possession on the day he was murdered. Allen also asserted that Miley was killed by one of his own, “a red-haired East St. Louis gangster” after they’d argued all that day over division of the loot they’d plundered and that the same person murdered Bozeman. The motive, according to Allen, was to gain control over the group of thieves.

“A ‘gambling war’ broke out in the ranks of those controlling and employed on the vessels, where merrymakers from the mainland nightly court the favors of Lady Luck at craps, roulette, blackjack, chuck-a-luck and other games of chance,” the Los Angeles Times quoted Assistant U.S. Attorney Milo Rowell as saying (July 24, 1932).

Justice is Done … Or is It?
O’Keefe’s trial kicked off on Dec. 5. The woman over whom O’Keefe and Bozeman allegedly had argued testified. Edna Frances Smith Wilson said she frequented Rose Isle and knew both men but didn’t believe they’d fought over her.

Another witness testified that shortly after the shooting, Roach had thrown a small lockbox inside the cabin overboard.

When Roach was on the stand, he said O’Keefe and Bozeman had begun arguing in the dining room and then all three had gone to the cabin and had begun drinking from the 5-gallon jug of gin in the room. The dispute, which centered on O’Keefe allegedly having made a female friend of Bozeman leave the ship, had continued. Eventually, O’Keefe had pulled out the gun and had shot Bozeman. Roach said he’d yelled that O’Keefe had shot Bozeman, after which O’Keefe had tried to choke Roach.

Defense attorney John S. Cooper created reasonable doubt by suggesting that Roach could’ve been the killer. Numerous witnesses testified that he’d been drunk and obnoxious from Monday afternoon to the discovery of Bozeman’s body. Roach himself admitted to having consumed at least four drinks.

Next, O’Keefe testified. He admitted to having been drinking but denied having had words with Bozeman. He claimed that he’d been asleep when Bozeman had been shot, had awoken to the sounds of the shots and had grabbed ahold of Roach who’d shoved him off. He said he hadn’t seen a weapon in Roach’s hand and didn’t know who killed Bozeman. He emphatically denied shooting Bozeman, who he said was his friend.

The ship’s chef testified that after the shooting, Roach had told him O’Keefe had fired the gun and also had expressed concern that his own fingerprints might be on it from his struggle with O’Keefe after Bozeman’s murder.

The jurors found O’Keefe guilty of manslaughter. After, Judge Frank H. Norcross sentenced him to five years’ probation because “the court is not convinced as the court would like to be that the defendant is the one who fired the shot,” he said (Reno Evening Gazette, Dec. 17, 1932). O’Keefe left the courtroom a free man.