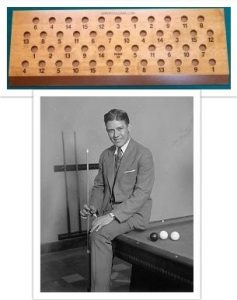 July 20, Wednesday: An advertisement ran in the Nevada State Journal (NSJ) newspaper, announcing the grand opening of La Boite Amusement Palace* slated for 8 p.m. the next night. The club, touted as the first of its kind in the United States, was to feature vaudeville acts and keno-pool.

The gambling game, played by two or more people, is a combination of billiards and keno. When players shoot, balls either fall into the pockets on one end of the table or roll onto and stop in numbered holes on a keno board at the other.

The club boasted large crowds for the first few nights, but then the guest count dropped off, becoming light.

Week Two
July 24, Monday: A fire broke out in garbage behind La Boite, but the fire department extinguished it before it could damage any nearby structures.

July 26, Tuesday: Five days after La Boite opened, Clarence filed to divorce his wife, Mabel D. Sumner Shockley, due to cruelty. He’d married her in San Francisco earlier in the year on January 25. Five months after their wedding, on June 30, Mabel had run a business personal ad in the Reno newspapers that had read: “Not responsible for any debts contracted other than by myself after this date.”

A month before Clarence married Mabel, in December 1931, he’d divorced his previous wife of six years, Mary Alice Welsh Shockley, in Los Angeles, also on the grounds of cruelty. He’d testified that she had had a pattern of leaving him when he’d lost money due to a failed business venture then returning when he’d gotten involved in a new, promising enterprise.

The night of July 26, Clarence failed to open La Boite. The employees — ushers/entertainers/ticket takers and orchestra members — told the press they hadn’t been paid through that date and Shockley had shined them on. He’d arranged to meet them at 1 p.m. the previous day to settle up, but had postponed the meeting to 7 p.m. and then hadn’t shown.

July 27, Wednesday: Mabel didn’t contest the divorce, and the judge granted it.

July 29, Friday: An ad in the morning NSJ and the late afternoon Reno Evening Gazette promoted the re-opening of the La Boite Amusement Palace, under new management, that night at 7:30 p.m.

Was Shockey just a flake or did someone, perhaps a local Mobster, drive him out of town?

* A boîte is a small nightclub or restaurant featuring live music.

Photo of Keno-Pool Game Board from KenoPoolGame.com
Photo of Welker Cochran from the Library of Congress