It Takes Club Fortune to Tango 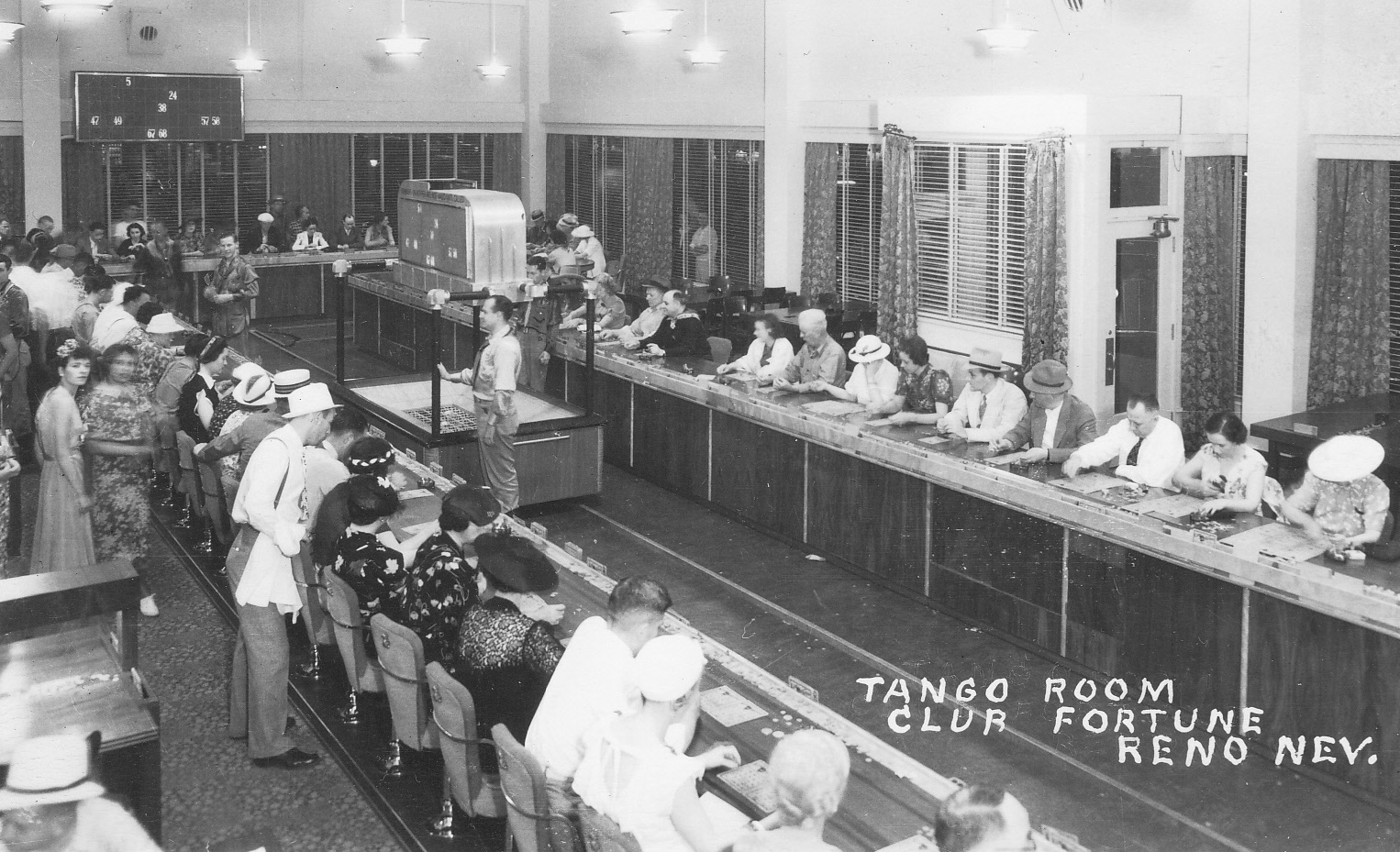 More so than craps, roulette, 21 and slots, all on offer, tango enraptured gamblers at Club Fortune, then “the outstanding night spot in Western Nevada,” according to the Reno Evening Gazette (Jan. 12, 1953).

Tango was “the Reno name for the well-known bean game,” as described in the newspaper column, “In the Biggest Little City …,” (Nevada State Journal, Jan. 17). The game had originated in Italy as lotto and had made its way to North America.

The name tango resulted from an incorrect pronunciation of the Spanish word “tengo,” which in the English language translates to “I have (it).” The game also was called beano, named after the dried beans players used to mark their card. Edwin S. Lowe commercialized the game as bingo in the U.S. around 1930.

Despite the various names, all of the versions generally were similar in nature to one another and to what we know today as bingo. In the 1930s and 1940s, players could win a bundle. 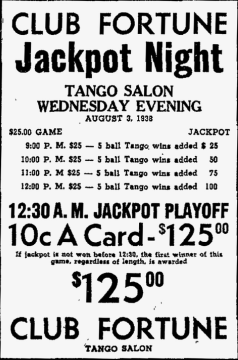 Tango with a Twist

Club Fortune’s tango was innovative. When it came to choosing the numbers for each round, the house had its own unique method. It didn’t involve randomly drawn numbers from a hat or numbered balls from a hopper.

Instead, patrons took turns tossing a baseball into a cart equipped with 80 numbered holes. A worker moved the cart back and forth in the narrow passageway between the two long tango tables, together accommodating 104 players, so they could shoot for a hole right from their seat.

When the ball landed in a hole, a large electronic board automatically displayed its number, and a game attendant announced it. Patrons who had that very number on their tango card marked it. Rather than the typical dried bean or corn kernel, Club Fortune had its guests use markers it had specially made. The first player to fill their card with called numbers won the round.

“The patrons throwing baseballs into the compartments added excitement to the game because customers felt that their skill in throwing the ball could influence the outcome of the game and help them win,” wrote Dwayne Kling in The Rise of the Biggest Little City: An Encyclopedic History of Reno Gaming 1931-1981.

More Than a Casino

Owner Robert Feder debuted Club Fortune on May 28, 1937 after spending about $125,000 ($2.2 million today) on remodeling, furnishings, equipment, gambling licenses and advanced rent. He’d divided the space, on the corner of Second and Center streets,* previously a store, into two large, high-ceilinged, connected rooms. The one to the west, boasting rosewood paneling and blue carpeting, contained the games of chance, a bar and dining room. The east room housed the tango salon.

Along with gambling, the hotspot, with the tagline “Come As You Are,” provided gourmet cuisine. One night’s dinner entrées included grilled spring lamb chops au cresson and roast prime ribs of beef au jus with Yorkshire pudding. The dining staff provided food for the numerous celebrations held there, including breakfasts, luncheons and holiday, anniversary, birthday and other fêtes.

“In Reno … there is one very gorgeous and beautiful new place to dine, dance, drink and gamble to your heart’s desire (provided your money holds out) — Club Fortune it is called. As an example of elaborate lighting and decoration and lavish expenditure there are few equals in the west, especially,” wrote Charles P. Squires in his newspaper column “Observations.” 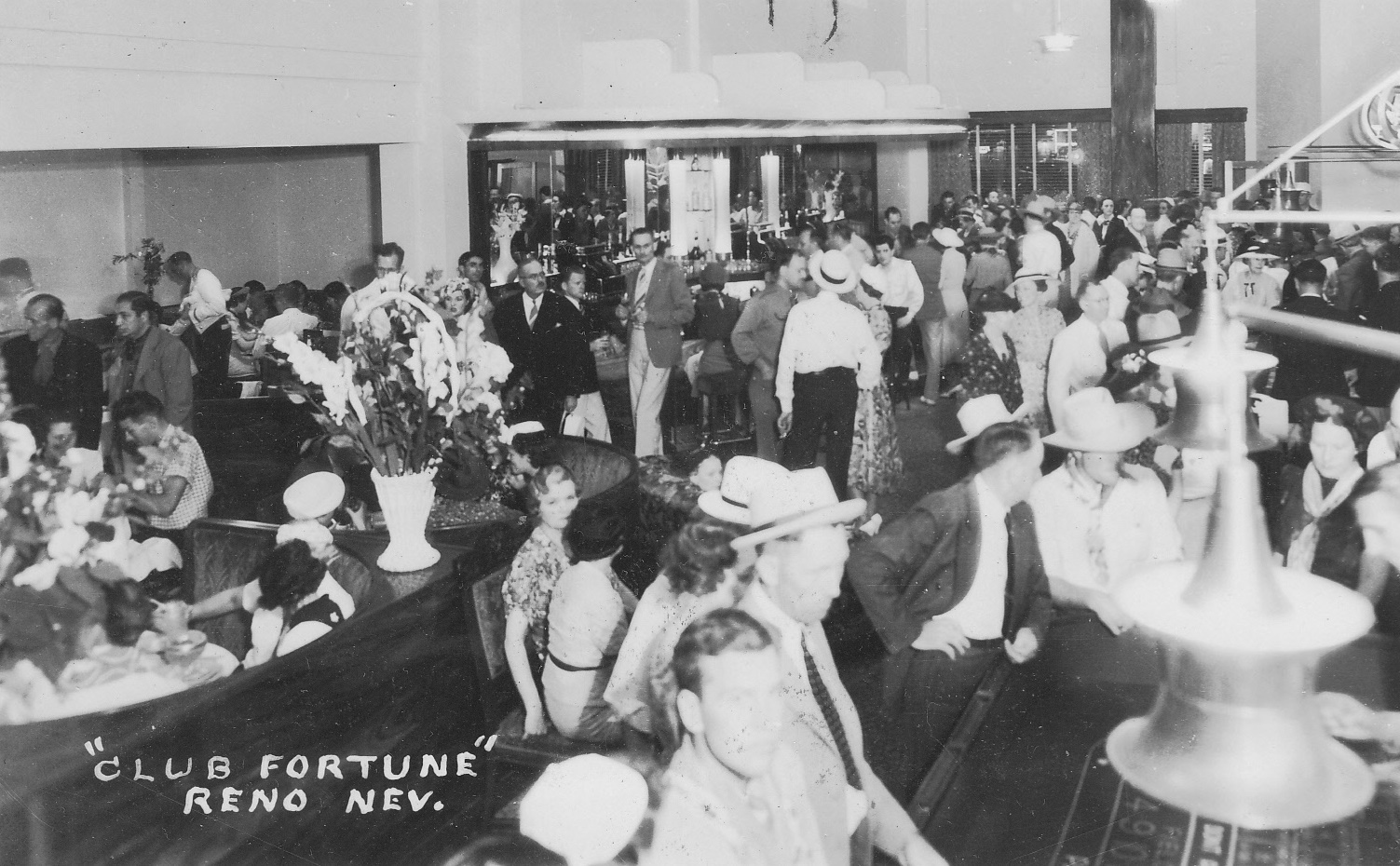 Five months after opening, Joseph and Sadie Zemansky replaced Feder. They’d just moved to Reno from Southern California, where Joseph had run a chain of jewelry stores and was an investor in the Agua Caliente Casino and Hotel in Mexico.

After a decade of running Club Fortune, the Zemanskys closed it in early 1947 when the lease for the space expired.

* Today, the Club Cal-Neva is located there.