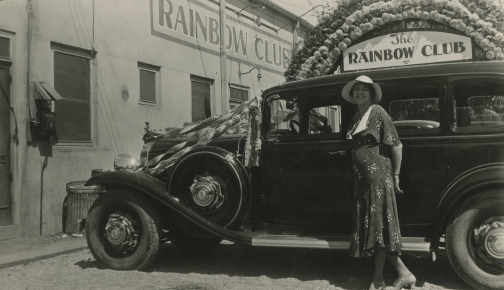 Clara A. Rowan in front of her Las Vegas gambling establishment

Catalyzed by unexpected circumstances, Colorado-born Clara Antoinette Rowan (née Beggs) became the first woman to own a legal casino in the United States.

Her husband, Thomas “Tom” George Rowan and his partner Leo Kind obtained one of the first gambling licenses issued in Clark County after Nevada legalized gambling in 1931, for the Rainbow Club, a gambling house at 131-133 S. 1st Street in Las Vegas. Each man owned 50 percent of the enterprise.

The club, which employed 75 people and offered craps, 21, bingo and slot machines, was busy, circulating thousands of dollars nightly, in part because it was air conditioned in the hot months. Locals and tourists, including celebrities like Clark Gable, frequented the Rainbow.

Catastrophic Impetus
On Aug. 22 of the same year, Tom Rowan, 39, two of his employees, Jake Cohen, 32, and Edward Loomis, 36, Clara and Edward’s wife, were traveling at night in Tom’s Buick sedan when it stalled, apparently out of gas, on the Boulder Highway, about seven miles outside of Sin City.

The men exited the vehicle, with the headlights still on, intending to flag down an oncoming driver and borrow enough gas to get back to Las Vegas. The two women remained in the back seat.

Suddenly, an approaching Chrysler four door struck Jake and Edward, who’d been standing in front of Tom’s Buick. The Chrysler ran into the Buick’s fender and then Tom, who’d been inspecting his gas tank.

Immediately after the impacts, the Chrysler’s driver, later identified as Alton Silcox, didn’t stop but instead, kept traveling toward Boulder Dam.

Tom, Jake and Edward all passed away at the hospital in the early morning hours due to the injuries they’d sustained from being hit.

Facing the Consequences
About two weeks after the accident, Silcox turned himself in to law enforcement. He was charged with two gross misdemeanors, failing to stop and help at an accident in which he was involved and failing to notify the sheriff of the incident. He claimed that the lights from Tom’s car had blinded him as he’d driven up a sharp incline of the highway.

Ultimately, he pled guilty. In early October, Judge William E. Orr sentenced Silcox to 90 days in the Clark County Jail. (The maximum penalty was one year of jail time plus a $1,000 fine.)

“In sentencing Silcox, the judge considered that the defendant had plead [sic] guilty after giving himself up, and that there was no evidence that he had been drinking,” the Las Vegas Age reported (Oct. 2, 1931).

Plunging Into Entrepreneurship
Upon Tom’s death, his stake in the Rainbow Club went to his wife Clara, who was around age 37 at the time. Subsequently, in November, the widow bought out Leo’s stake for a reported $30,000 (about $506,000 today), thereby becoming the establishment’s sole proprietor. Despite hiring a man to manage the gambling house, she became and remained active in its operations.

“Unimpressed with any significance which may be attached to her unique position as the only woman operator of a gambling establishment, Mrs. Rowan is concerned only with the creation of new ideas, and plans for the improvement of her establishment and its facilities for both men and women,” noted the Las Vegas Age (Nov. 20, 1931).*

* It’s unknown how long Clara (who remarried in 1932, becoming Clara A. Morgan), owned the Rainbow Club. According to Fuller’s Index Plus, it likely was until sometime in 1934.