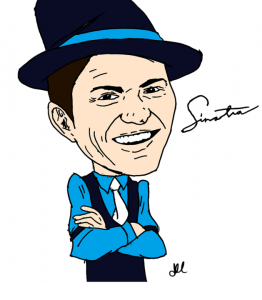 Apparently, the beloved crooner Frank Sinatra, Sr. had a temper, which he sometimes unleashed when casino operators denied him additional, excessive amounts of credit when gambling.

In one instance when Sinatra lost control, he wound up losing two front teeth. That was in 1967, when he provoked a fight with Carl Cohen, the manager of the Sands in Las Vegas, Nevada, yelling obscenities at him and hurling a handful of chips into his face.

The 250-pound Cohen, who also got angry, punched the star in the mouth, knocking him to the floor. Sinatra tore up the hotel switchboard, drove a golf cart through a glass window and tried to call Howard Hughes, who’d just purchased the hotel.

It’s unclear what the kerfuffle was about. The media reported it was because Cohen closed the singer’s $200,000 (about $1.4 million in today’s dollars) line of credit. Others said it was related to Sinatra ending his 16-year professional relationship with the Sands and contracting with Caesars Palace instead. Maybe it was both. You’d think the dental consequences of that incident would’ve cured Sinatra of future behavioral eruptions, but they didn’t.

Tantrum-Cum-Assault
In 1970, Sinatra had just begun a three-week engagement at Caesars Palace when he got into an argument with Sanford Waterman, Caesars’ casino manager. Sinatra had been playing baccarat for $8,000 a hand at a table where the limit typically was $2,000. He asked Waterman to double the limit to $16,000 (about $98,000 in today’s dollars) and let him play on credit. Waterman refused.

Sinatra threw gambling chips, squeezed Waterman’s throat hard enough to leave marks and threatened, “The mob will take care of you.” In response, Waterman pulled a 0.38-caliber revolver from his waistband and pointed it at Sinatra, which ended the scuffle. But Sinatra cancelled the remainder of his scheduled performances at Caesars because, according to his spokesperson, Sinatra was suffering from exhaustion and a recent hand surgery. Sure.

Waterman was arrested but released, as law enforcement and the district attorney figured Sinatra had been the instigator. The local sheriff, Ralph Lamb, had enough of Ol’ Blue Eyes’ rudeness and antics.

“If Sinatra comes back to town Tuesday, he’s coming downtown to get a work card, and if he gives me any trouble, he’s going to jail,” Lamb said. “I’m tired of him intimidating waiters, waitresses, starting fires and throwing pies. He gets away with too much. He’s through picking on the little people in this town. Why the owners of the hotels put up with this I plan to find out.”