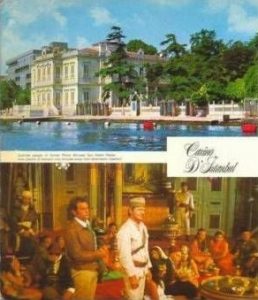 A bomb exploded on the Casino d’Istanbul’s roof, injuring several people, on the night of Saturday, May 1, 1971. It happened during a banquet hosted by the Dayton, Ohio-based National Cash Register Company and attended by 1,400 Europeans and Americans.

Just the month before, 11 provinces in Turkey had been put under martial law due to a renewed wave of terror, marked by kidnappings for ransom and bank robberies.

Two months earlier, in March, the country’s army demanded a new government be put in place to hopefully end the labor strikes, street protests, bombings, robberies, kidnappings and political assassinations that had been occurring during the prior few years. Much of this continual extremist violence had targeted Americans and their property.

From Arkansas to Istanbul
In fact, the Casino d’Istanbul was owned and operated primarily by Americans, specifically people who most recently had run illegal gambling in Hot Springs, Arkansas. When Governor Winthrop Rockefeller eradicated gaming there in 1967, this group sought to debut the first casino in Turkey. Investment Opportunities Incorporated outlaid 95 percent of the $315 million project cost (about $1.9 billion today). The Bank of Tourism in Turkey covered the remaining 5 percent and was to receive a percentage of the casino’s future profits.

The United States-based entity obtained the required Turkish gambling permit and acquired, from his heirs, the lavish, Istanbul summer palace of the late Said Halim Pasha, who’d served as the Prime Minister of Ottoman Sultan Mehmed Resat between 1913 and 1917. (He’d been assassinated in Rome in 1921.) Built in 1878 and boasting an exterior blend of French and Egyptian architecture in an empire style, the mansion sat on the Straits of Bosporus, the waterway between the Black and Aegean Seas, where Europe and the Middle East meet.

The Hot Springs group converted the mansion into Casino d’Istanbul, a place where foreign guests could dine, dance and play games of chance (Turkish citizens weren’t allowed to gamble, and patrons had to show their passport for entry). The casino, open from 8 a.m. to 4 p.m. at least initially, offered roulette, blackjack, baccarat, chemin de fer, craps and slots. On opening night, September 20, 1969, most of the guests held Lebanese passports.

“For years, [Casino d’Istanbul] was operated using former spa city casino employees, flying both the profit and the last shift home to Hot Springs every 30 days,” wrote Robert Raines in Hot Springs: From Capone to Costello. The casino was shuttered in 1975 due to the looming “threat of Turkish government intervention.”