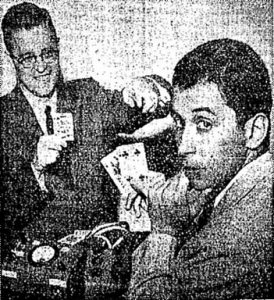 “Las Vegas seemed to be both fascinated and frightened by the little computing machine,” reported Ray Duncan in the Independent Star-News (Dec. 5, 1960).

The referenced device, via a dial on its front, advised blackjack players how to proceed with each hand, get another card or hold. The electronic instrument remembered the cards played but, also, computed the math of various complex blackjack scenarios. Its operation required “some very fast and frantic switching on the part of its operators,” explained Duncan.

“[The inventors] maintained that their machine and their system has a carefully calculated mathematical edge over the house, if allowed to play freely without a mid-way reshuffle, and that in the long run its statistical expectation is to win at a small but steady rate.”

This 5-pound apparatus, which the reporter noted resembled a “small table radio sliced in two pieces,” was created by two unmarried engineers who worked at the Jet Propulsion Laboratory in Pasadena, California —  Bob Bamford, 30, and Joe Alper, 22. They called their contraption Mark II, as it was the third iteration; the media dubbed it the “Pasadena robot.”

Taking it Live
Alper and Bamford traveled to Las Vegas, Nevada to try Mark II in a few casinos. They called ahead for permission, which the Flamingo, Desert Inn and Silver Slipper granted. The Sahara didn’t.

Starting at the Flamingo, they won $29 ($242 today) in the first 10 minutes — nearly $3 ($80) a minute. Consequently, the dealer reshuffled the card deck mid-game, which destroyed Mark II’s computing advantage. The engineers balked at that move and asked to play without mid-game shuffling. Ultimately, after much deliberation, the casino personnel said no.

The pair next tried the Dunes, where they were limited to betting $5 ($41 today) a hand, which again hindered Mark II’s abilities. However, despite the restriction, after three hours of playing, the Pasadenans won $107 ($896 today).

“But this was nothing like the take they calculated to bring home with their $750 [$6,280 in 2018] stake, if they were allowed to play a straight, cards-as-they-come, bet-as-you-like game,” Duncan indicated.

The following day, the two couldn’t find a Vegas casino that would let them use their machine and that wouldn’t hedge against potential losses.

“We’re not gamblers here,”‘ one casino owner told them. “We’re in the gambling business.”

Bamford and Alper returned home and to their jobs.