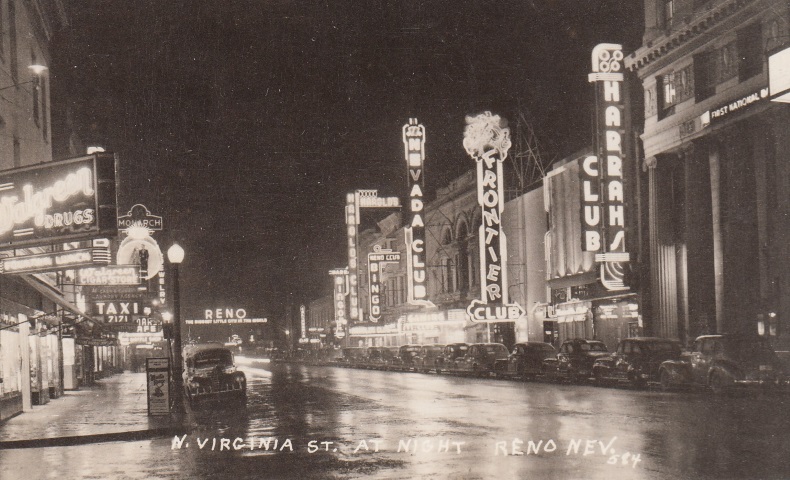 In the Bank Club, a co-proprietor of a local gambling saloon, Andrew Jackson “Jack” Blackman, shot to death James Lannigan, a small-time thug, on October 30, 1944, an action for which he was acquitted.

In the Town House, four employees, on July 9, 1946, bound and beat up Edwin X. Beisel, to whom the court also awarded damages.

“It is nothing out of the ordinary to have disturbances, petty quarrels and arguments in such establishments. The nature of the business invites such occurrences and in order that responsible order may be preserved it has long been the custom to employ ‘strong arm’ boys who can throw out the disturbing elements” noted the Reno Evening Gazette (Jan. 22, 1945).

The above and other high-profile crimes in Reno, Nevada casinos got some locals considering changes to the status quo of security in gambling houses, to solve in part what had become the “bouncer problem” (Nevada State Journal, Dec. 12, 1945).

Distinctive Attire Suggested
In 1945, a Washoe County grand jury recommended mandating that anyone policing in gambling clubs, saloons and the like wear a uniform or easily be identified while working. Later that year, Dr. Earl T. Martin of the Veterans of Foreign Affairs asked the city council to require bouncers to wear uniforms. He argued that patrolmen identified as such by their garb would have a psychological effect on guests, particularly current and former military members, and go a long way toward helping maintain order in gambling establishments. Although the councilmembers agreed to review Martin’s recommendation, nothing came of it.

Police Officers v. Employees
In the following year, 1946, the third iteration of an ordinance on the issue was introduced at a Reno City Council meeting. It required that all gambling places with more than six game tables or other devices (excluding slot machines), have a uniformed Reno Police Department officer on the premises.

It required the gambling houses to pay the city clerk wages for these officers — $250 (about $3,200 today) per month per officer — and the city then in turn would pay the officers. The monthly salary was to graduate from $200 during their first year of service to $205 in their second and $215 subsequently.

The proposed ordinance also mandated that gambling licensees post a $10,000 ($129,000) bond, holding the city harmless from any liability from damages occurred during an incident involving a city police officer.

A Mysterious End
The council deferred action on the proposed ordinance at the subsequent meeting then didn’t act on it at the following two ones. The measure never even got to a vote.

“No reason for allowing the bill to die was ever mentioned in open meeting of the council,” reported the Reno Evening Gazette (April 5, 1946).