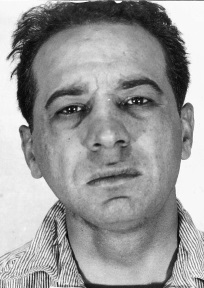 Salvatore “Tar Baby” Orester Terrano is one of numerous criminals whom Nevada gambling regulators approved to own a casino in the state.

In May 1947, the tax commission granted the Northern Californian, then 43, a probationary, 30-day gambling license to offer roulette, craps, 21 and slot machines at the Twin States casino at Lake Tahoe in Stateline. This approval was after the agency had conducted an investigation into Sal Terrano’s past.

The Dirt
What that should’ve revealed was Terrano:

• Had been selling opium out of the Dog House, a Reno, Nevada gambling club where he’d worked as a dealer in the 1930s.

• Had been convicted in May 1939 for narcotics trafficking between San Francisco and Reno. Then 34, he’d been caught with four five-tael tins* of opium (about 10 pounds) in his car in a hidden rear compartment while driving into Northern Nevada.

The drugs had come from Eugene “Rosy” Bastida and Ernest “Ole” C. Olson, owners of the Turf Club, a San Francisco bar and bookmaking place, who’d gotten the crew of the USS Chaumont, a Navy transport ship, to smuggle them in from Asia twice a year.

Back to Tahoe
The case of Terrano also was one in which the two pertinent, gaming license-issuing agencies diverged in their decision.

Once free, the ex-convict received that month-long gambling permit for the Twin States Club in spring 1947 from the state tax commission.

However, simultaneously, the licensing board of Douglas County, in which the club was located, refused to give Terrano a gambling or a liquor license because the business was “not the type of establishment wanted in Douglas County,” said Sheriff James Farrell, likely referring to one where drugs were sold and/or consumed on the premises (Nevada State Journal, May 16, 1948).

Without the county’s approval, Terrano couldn’t be involved with gambling at the Twin States. He returned to San Francisco where he dealt drugs and sold merchandise like Jumping Jimminy and King Kong toys out of his Twin States Novelty Company store.

Nabbed Again
Five years later, in March 1952, while living in the Mapes hotel-casino in Reno, he was arrested again for the transportation and sale of narcotics. He’d been dealing heroin for Waxey Gordon (né Irving Wexler), who’d run the West Coast branch of a nationwide, multimillion-dollar narcotics syndicate until he’d been imprisoned for pushing drugs in 1951. Gordon was a mobster and former bootlegger and illegal gambler.

Terrano was sentenced to four years to be served at the U.S. Federal Penitentiary Leavenworth. Per the judge, he was sent to a hospital in Fort Worth, Texas to get clean before being taken to the Kansas prison.

He died in Leavenworth six months later, at 49, supposedly following minor surgery on an obstructed coronary artery. He was interred in a family plot in the Holy Cross Catholic Cemetery in Colma, California.