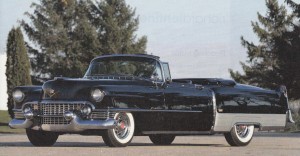 A brouhaha over bingo made it a memorable year for gambling at Lake Tahoe.

To lure as many tourists as possible into their casinos, numerous operators offered big-ticket prizes for winners at summer’s end (most places closed for the winter months). The Ta-Neva-Ho boasted awarding trips to Mexico and Hawaii; the Cal Vada promoted a $10,000 giveaway and the Cal-Neva Lodge drew visitors with a new Cadillac.

The Cal-Neva Lodge’s advertisement read: “If won in 49 numbers or less, the winner will receive a 1954 Cadillac convertible. This number will be increased by an additional number every two weeks until the car is won.”

Its event, dubbed the “Grand Slam Swan Song Bingo Game,” attracted so many people that the crowd extended onto the property’s California side where gambling was illegal (the Cal-Neva straddles the California-Nevada border).

“I saw the car up there all season myself. The people were just drooling over it,” said Robbins Cahill, secretary of the Nevada Tax Commission, which regulated gambling at that time (Nevada State Journal, Oct. 1, 1954).

Despite Cahill warning all casino licensees the tax commission expected them to award their advertised prizes at the season’s close, the Cal-Neva Lodge didn’t give away the Cadillac, deceiving the public and breaching their trust, which it shouldn’t get away with, Cahill said.

The casino’s owners hadn’t awarded the car because nobody had covered a bingo card within the required 55 plays and they’d “forgotten about” the posters advertising the Caddy giveaway, they said. They’d announced five days before the casino was to close that if no one won the car, they’d divide a $7,000 “Pot of Gold” between the winners, which they had done, among six people.

But a player, not one of the six, who’d achieved bingo in 57 plays complained to the tax commission the car wasn’t awarded. After he’d groused, the Cal-Neva Lodge had offered him either the Cadillac or $5,000; he’d chosen the money. (The casino owners later sold the Cadillac for $48,000.)

As a sort of punishment, when the Cal-Neva casino owners applied for a subsequent gambling license for a different casino, the tax commissioners granted it but forbade them from running a bingo game.

Reforms Enacted
To prevent similar problems in the future, Cahill considered enacting uniform controls over bingo games or abolishing them altogether. Instead, the tax commission and the game operators developed a mutually agreeable policy. It called for:

• A minimum of 50 numbers drawn for any cover-all or blackout bingo game.
• A maximum prize of $3,000 to be offered for any single game.
• Only cash and no merchandise prizes.
• All advertised prizes to be given away by Sept. 15.

The gaming regulators threatened to deny bingo licenses in the entire Lake Tahoe area should the area’s bingo operators disobey the new rules.