Ante Up Your Pig 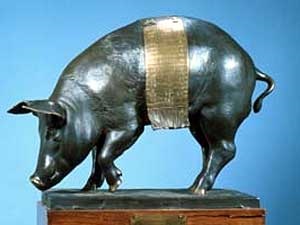 When two United States state governors made a friendly bet, neither knew it would become problematic.

They wagered each other their state would win the upcoming football rivalry between the Minnesota Golden Gophers, a national powerhouse, and the Iowa Hawkeyes, the loser having to award the other a prize hog.

Minnesota beat Iowa, 13 to 6, leaving Governor Clyde Herring to make good on the wager. He set out for St. Paul, accompanied by a 320-pound, thoroughbred porker named “Floyd of Rosedale” in honor of Minnesota Governor Floyd Olson and the pig’s birthplace — Rosedale Farms. Floyd, the pig, was the brother of “Blue Boy,” an Iowa State Fair grand champion boar and actor in the 1933 Will Rogers film, “State Fair.”

“I’ll drive the pig into Governor Olson’s office and if the police arrest me for violating an old city ordinance, I’ll get an immediate pardon from my host,” Herring said (Reno Evening Gazette, Nov. 13, 1935).

Herring delivered the bounty to Olson.

“The boar refused to pose for pictures until the executives pulled him from under a desk, slapped his sleek sides and tugged on his ears to steer him into position,” wrote the United Press (Nevada State Journal, Nov. 14, 1935).

Herring In The Crosshairs
The Iowan governor learned a man named Virgil Case had obtained a warrant to be served on Herring upon his return to Des Moines. The document charged the governor with unlawful gambling, a misdemeanor punishable by a fine up to $500 and a prison term of one year. Case was active in the Des Moines Social Justice Club and an editor of the monthly Des Moines Times-Examiner.

“I raise hell with public officials — and governors too — because they should be the first to set an example for others,” he said (Nevada State Journal, Nov. 14, 1935).

The governors found the charges amusing. Herring asked Olson to be his attorney in the matter, as he’d been district attorney of Minneapolis previously. Olson jokingly reassured Herring that if he remained in Minnesota, he’d be safe from extradition.

Back in Des Moines, the assistant county attorney, C. Edwin Moore, filed a motion to have the charges against the governor dismissed and to have Case’s motives for filing the action investigated. Then the publisher of the weekly Des Moines Post News, Ray McAndrews, filed a petition asking that Moore’s motives be investigated as “nothing in the Iowa code book authorized the procedure being followed” (Oelwein Daily Register, Nov. 23, 1935).

About two weeks after the troublesome wager, the court addressed the matter. Judge J.E. Mershon vacated the charges against Olson on the grounds of no jurisdiction as the wager had been consummated in a different county. Mershon ordered that information Case had filed be released and McAndrews’ motion be removed from the records.

In Memoriam Of Floyd
Unfortunately, “Floyd of Rosedale” died from swine fever a few years later. However, a Minnesota artist memorialized him in bronze, and the Iowa and Minnesota teams have wagered that coveted statue every year since.