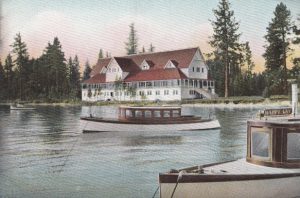 Touted as “the finest clubhouse west of the Rocky Mountains,” the Casino at Tallac debuted at Lake Tahoe’s South Shore in California in July 1902 despite gambling having been illegal in the state since 1860 (San Francisco Chronicle, July 15, 1902).

“Tallac, heretofore the staidest and most exclusive resort in the Sierra Nevadas, is now the scene of nightly revelries, the clink of the glittering gold, the roll and rattle of the ivory ball and the constant hum of excited voices can be heard most any night in the big, new gambling hall, the Casino,” reported the Nevada State Journal (Aug. 4, 1905).

Elias “Lucky” Jackson Baldwin, a San Francisco realtor and stock speculator, built the summer getaway for $30,000 (about $750,000 today). The rustic casino, finished in maple and pine, contained 3.5 levels. It was furnished with gambling equipment for roulette, faro, and dice, card and other types of illegal games, which “were conducted there day and night” (Los Angeles Times, Aug. 10, 1905).

The casino’s playing cards were unique, and sets, housed in a leather case, were sold as souvenirs. The cards portrayed, for instance, natural scenes from Lake Tahoe and Fallen Leaf Lake or showed guests enjoying the on-site recreational offerings, reported the Tahoe Heritage Foundation, which supports various preservation, restoration and education projects and programs in the Lake Tahoe Basin. One contained an image of H.O. Comstock, the cards’ designer. Even Baldwin himself was pictured, as the “Jolly Joker.”

Other recreational amenities in the Casino building included four bowling alleys, billiards tables, sun parlors, wine rooms and a theatrical stage, café and ballroom. Rare for the time, the structure boasted electric lights, 500 of them. Along with the gambling house, the resort encompassed two hotels. 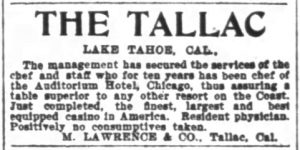 Gaming Was Protected
Despite their being prohibited by state law, gambling games ran wide open at the casino. Owner Baldwin had contacts in Placerville who’d notify him when law enforcement officers were on their way. It took them a while, as it was 60 miles up a mountain from there to Tallac. When alerted, Baldwin had the game tables hidden.

The local residents didn’t mind the gambling, as it “‘brings them business’ and makes Tallac a lively resort” reported the Reno Evening Gazette (Aug. 24, 1905). California officials ignored it, believing that enforcement of the law “would force the upscale resorts to move to neighboring Nevada (Aug. 3, 1905), where numerous forms of gambling, at the time, were allowed. (In 1909, however, Nevada abolished gaming; the state fully reinstated it in 1931.)

The People and The Trek
Guests and players were primarily wealthy folks of both genders from the West Coast, such as Nathaniel “Nat” Carl Goodwin, the American actor and vaudevillian.

“Women who move in high circles of society in the larger cities, dressed in fashionable clothes, and flashing rich jewelry, are often seen in the Casino, where they sit down and take a hand in some of the games, with as much freedom as some of the men,” described the Los Angeles Times (Aug. 10, 1905).

The trip to the Casino at Tallac was long. Visitors starting out in San Francisco first had to take a barge across the San Francisco Bay then a train to Sacramento. They and Sacramentans journeyed by train to Truckee. Next was a stagecoach ride to Tahoe City (at North Lake Tahoe), where they boarded a steamship that then crossed to South Lake and stopped at Yank’s Pier. Closer visitors traveled by stagecoach from California’s Placerville and Nevada’s Carson City.

The Casino’s Fate
Baldwin passed away in 1909, at which time his daughter, Anita, assumed control of the property. She ran it into the 1920s but after a sustained decrease in the number of tourists, she had all of the buildings, including the Casino, demolished in 1927.