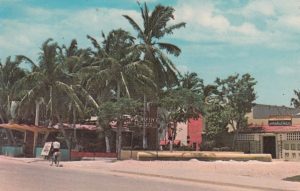 In February, The New York Times outed Clifford A. Jones. It brought to light that he held gambling interests in and out of Nevada, which The Silver State’s gaming law then prohibited.

It was no secret that Jones owned shares in the Thunderbird, Palace Club, Golden Nugget and Lucky Strike casinos in Las Vegas.

What The Silver State’s gambling regulators didn’t know and learned from the newspaper story was that Jones co-owned the Casino International in Haiti and planned to open three more gambling houses, the first in Aruba, then Puerto Rico and Jamaica.

The year before, the state mandated that all licensees with casino interests both in and out of Nevada choose one or the other locale or risk losing their Nevada gambling license. At that time, Jones indicated he’d stay domestic and divest his only international holding — the Havana Hilton in Cuba.

Law, Politics, Gambling
Jones was an attorney with the law firm Jones & Wiener and had represented several major Las Vegas casinos. He also had been the state lieutenant governor from 1947 through 1954.

“In a town [Las Vegas] built on ‘juice,’ or connections, Jones’s nickname was ‘the Big Juice.’ He was at the center of an ecosystem in which mob money guys, state officials and earnest gamblers moved with ease,” wrote David Schwartz in Grandissimo: The First Emperor of Las Vegas, a book about Jay J. Sarno, the mastermind behind Caesars Palace and Circus Circus.

The State Reacts
Upon learning the content of the Times piece, Nevada Governor Grant Sawyer asked gaming investigators to determine whether or not it was factual. It was.

Also true was that Jones still owned his gambling interest in Cuba! Getting out of it perhaps wasn’t easy or even possible, as it might not have been up to him. Jones was believed to be the front man of that casino for powerful, big-time mobsters, Meyer Lansky and Abner “Longie” Zwillman, the real principals.

In March, gambling regulators ordered Jones to show cause why he shouldn’t lose his Nevada gambling license.

Jones Chooses Again
At the hearing he confirmed he remained financially involved in at least two casinos outside of Nevada. Jones agreed to disengage from the Havana Hilton by March 21 but asserted he’d continue as a proprietor of the International Casino in Haiti.

Given Jones’ stance, presumably the state informed the gambler he’d have to forfeit his ownership in the Las Vegas casinos.

By July, Jones had done just that. He’d:

• Sold his 2.3 percent holding in the Lucky Strike to Monte Bernstein
• Sold his 16 percent ownership of the Thunderbird to Joe Wells
• Sold his interest in the company that operated the Silver Palace also to Joe Wells
• Transferred his 12,500 shares of Golden Nugget stock to G.C. “Buck” Blaine

Jones finally had made good on his promise, albeit a revised one.