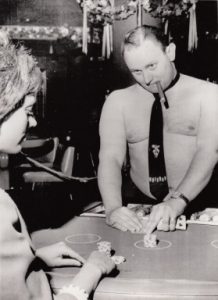 “Male Cheesecake?: Jerry Boyer of Reno’s Holiday Hotel offers his spoof of topless ’21’ dealers employed at the Silver Nugget in North Las Vegas. Boyer says his costume would attract women customers and eliminate current furor over the use of peakaboo blouses, but ‘it’s chilly.'” (That was the original caption to this UPI Telephoto that ran in the Las Vegas Sun on April 20, 1966.)

The Silver Nugget casino announced it would debut topless, female, 21 (blackjack) dealers during the midnight to 8 a.m. shift.

This, too, was the gist of the complaints the Nevada attorney general (A.G.) received in April. Allegedly, the North Las Vegas business had hired women willing to work naked to the waist and told its other female employees to either comply or get fired.

A.G. Harvey Dickerson announced that if the Nugget went forward with its plan, he’d “seek a court injunction to halt this affront to the decent and law abiding citizens of Nevada” and urge the gambling authorities to consider pulling its gaming permit (Reno Evening Gazette, April 15, 1966).

A few commenters noted the impracticality of the idea:

“What happens when the blackjack player reaches out, like they usually do, to put a tip in the dealer’s shirt pocket?” a gambling regulator asked.

Representatives from several hotel-casinos on the Las Vegas Strip said topless dealers would “cheapen their image.” (Remember, at that time, topless showgirls had been performing in Las Vegas for eight years.)

They weren’t naked from the waist up, however. Instead, they sported pasties underneath see-through, chiffon blouses attached to a satin leotard bottom.

“What happened, of course, is that the casino was ‘backing up’ a bit, not wishing to incur the wrath of Nevada officialdom,” noted a Nevada State Journal editorial, referring to the Nugget’s having modified the outfit from no top to sheer top (April 18, 1966).

In a news conference held the day before his employees appeared in the peek-a-boo uniform, Bob Miller, general manager of the Silver Nugget, criticized Dickerson for condemning the club before knowing the facts or having proof. He denied that his casino ever had planned to showcase topless dealers and that he’d threatened the jobs of any women employees for dress code noncompliance.

“We are very proud of the manner in which we conduct our affairs and our operation,” he said (Nevada State Journal, April 16, 1966).

Goes Too Far
After the dealers wore the new attire, the American Federation of Casino and Gaming Employees Union requested the state sanction the casino. Subsequently, the Nevada Gaming Commission issued an emergency order requiring the Nugget to eliminate the skimpy apparel or lose its gambling license.

“Permitting virtually nude women to deal 21 … I don’t think we should go that far,” said Edward Olsen, chairman of the Nevada Gaming Control Board.

Promotional Jackpot
The Nugget’s ploy may have started as an attempt to lure customers from Las Vegas casinos three miles away, which at the time, didn’t employ women dealers. Yet, it morphed into a marketing windfall for the North Las Vegas casino due to the hoopla that ensued throughout Nevada and California.

“Who, outside of Clark County, ever heard of the Silver Nugget in North Las Vegas until last week? Either the North Las Vegas casino has hired a very clever public relations man or it fell into a publicity gold mine,” read the editorial (Nevada State Journal, April 18, 1966). “Regardless, it has scored a clear promotional beat — even if its 21 dealers are compelled, in the future, to wear buttoned-up overcoats.”