The original owners of The Tavern in Reno planned to open it on Nevada Day (October 31) in 1932, but the economic downturn in the state, caused by The Great Depression, forced them to delay it.

“Prior to October 29, Nevada had not felt the hardships of the nation’s worst depression as had other states of the Union,” reported the Nevada State Journal (Dec. 16, 1936). “The state apparently was coming along under its own power during the fall of 1932 when the paralyzing financial blow fell without warning, closing the doors of every bank in the state with the exception of three. … For a time, it was practically impossible to cash a check in the city of Reno.”

Perhaps this unforeseen crash was an omen, as the gambling-nightclub went through additional rough patches. The final blow was a fast-spreading fire that terminated the business’ nine-year run.

At the time, gambling had been legal in Nevada for about 1.5 years, but Prohibition would still be in effect for another year.

Over the ensuing years, the business grew, and the owners accommodated it by expanding and improving the property. They added a larger dining room, a club room and a lounge. They enlarged and redid the kitchen. They acquired the neighboring 2 acres and installed on them a parking lot. They even paid out of pocket to have Reno’s water system extended another 2,800 feet westward on the Verdi Highway.

The Tavern even gained national renown due to nightly orchestra radio broadcasts from it. In fact, three broadcast firsts in Nevada — of the Don Lee-Columbia Network, throughout North America and around the world — were achieved at the Reno nightclub.

Challenges still occurred. For instance, a bank of the nearby Orr Ditch broke in 1935 and flooded The Tavern’s parking lot and basement. It caused about $3,000 ($58,000) worth of damage to the liquor inventory and equipment stored there.

The Tavern celebrated its fourth year in 1936. Since day one, it had been open seven nights a week and never closed for even one of them. Its workforce had grown to 53 people from 17.

The full program of birthday festivities for guests included an anniversary dinner, followed by the debut of Nick Stuart and his MCA orchestra. At 10 p.m. one-hour, all-request broadcast from The Tavern featuring the same orchestra and Ruth Skinner, vocalist for the band. At midnight, the culinary staff served a complimentary cold buffet supper in the cocktail lounge. Music and dancing continued until 3 a.m. A birthday cake, an edible replica of The Tavern, was displayed all night. The cake was an edible replica of The Tavern.

“The Tavern, Reno’s smartest night club, is one of the most popular ever opened in this vicinity,” the Nevada State Journal wrote.

In early 1937, the owners closed The Tavern for three months, during which they had improvements made to it and swapped out new equipment for old. For one, they had a new cocktail lounge built..

“The Tavern, just on the western outskirts of Reno, a favorite old place with Nevadans, has been remodeled and redecorated until it is as gorgeous as the rest,” Las Vegas Age columnist Charles P. Squires wrote (July 2, 1937). 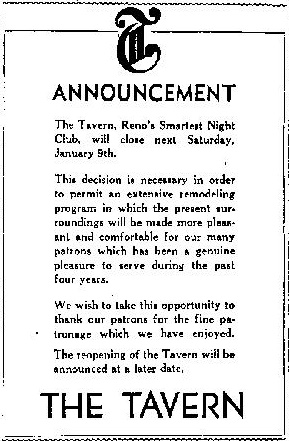 In September 1938, The Tavern again was closed, this time for three days, to change management and reorganize. Baker had left, and Herman Landres replaced him. Ed Rich took over the gambling. Barney Newman became the catering manager.

This new arrangement only lasted about two months, though. It’s unknown why.

Clark, King, Coppersmith and Nelson subsequently sold The Tavern to Ernie Crofton, who reopened it in November. It appeared to be a good fit, as Crofton had immense industry experience from his days running the gambling at the Agua Caliente Casino and Hotel and managing the Foreign Club, both in Mexico.

This, too, didn’t work out, for unclear reasons. Crofton closed The Tavern in January 1939.

After Clark, et al. had gotten out of The Tavern, a local couple sued all four of them. J.A. and Louise Barbash claimed Louise had fallen at the nightclub when the quartet had owned it, during which she’d sustained an injury. The two sought $15,000 ($282,000 today) — $10,000 in actual damages and $5,000 for pain and suffering.

The Tavern changed ownership again, and the third set of proprietors — James M. Carey and Morrie Trieber — opened its doors in mid-1939. Despite initial success, they ran the business into financial ruin, and it wound up in its creditors’ hands.

Hope for The Future

On November 20, a board of trustees charged with selling The Tavern, auctioned off the building and 54,450 square feet of property in one package. The event drew about 100 people.

Bids ranged from $15,000 to $21,000. The highest was that of Victor “Vic” Partipilo, owner of Reno’s Wander Inn gambling-nightclub and cabaret. The trustees approved the sale to him and his wife, Mary Dormio Partipilo.

Not long after, on Thanksgiving Day, The Tavern debuted yet again.

With Victor at the helm, The Tavern surpassed the one-year mark, a milestone the previous two sets of owners failed to achieve.

A few months later, however, on May 4, 1941, misfortune befell the property. A fire burned it down, ending its story.

The Log Cabin, presumably a restaurant and/or night club, was the original business in same building and on the same property as The Tavern. Records show a Frank Sullivan owned it in 1924, the same year Prohibition agents arrested him for serving alcohol. In 1926, a newspaper advertisement indicates the place went more casual, as a drive-in spot offering ice cream sodas, root beer, hot dogs, sandwiches, buttermilk, candy. A year later, the business was called the Log Cabin Inn and offered nightly dancing and entertainment, according to an ad. In July 1929, different management reopened it also as a night club but changed the name back to the Log Cabin.

In the fall of 1929, a Harry Hutton acquired and debuted it as Hutton’s Hut, a steak and fried chicken restaurant. That enterprise endured until 1932, when Clark, et al. acquired it and transformed it into The Tavern.