Quick Fact – The Hard Way or the Easy Way 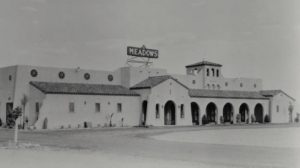 Actors Clara Bow and Rex Bell gambled at the Meadows in Las Vegas in summer 1931 and racked up a $1,100 loss (about $18,000 today), for which they left an IOU. By December, the two hadn’t paid what they owed (Bow had wriggled out of covering a gaming debt the year before). The casino owners — Anthony “The Admiral” Cornero Stralla, his brother Louis Cornero and various mobsters — sued the couple in December for recovery of the funds. The next day, Bow and Bell secretly married in Sin City.

A mysterious incident occurred about 1.5 months later. The newlyweds spent an evening playing games of chance at Vegas’ Boulder Club. After winning about $1,000 playing craps, Bow departed for home, leaving her winnings with her husband, who stayed at the casino.

When Bell eventually left, on his way out, two masked men robbed him. “They prodded the guns so hard in his ribs he decided not to resist them and permitted them to take the money, he said,” reported the Nevada State Journal.

Photo from the University of Nevada, Las Vegas’ Special Collections