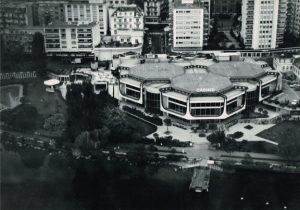 The sight of Switzerland’s Montreux Casino burning down on December 4, 1971 was the inspiration for Deep Purple’s hit song, Smoke on the Water.

A fan firing a flare gun during a Frank Zappa and the Mothers of Invention concert caused the conflagration of this then-90-year-old establishment. The casino subsequently was rebuilt.

Here are the lyrics, which tell it all:

We ended up at the Grand Hotel
It was empty, cold and bare
But with the Rolling truck Stones thing just outside
Making our music there
With a few red lights, a few old beds
We make a place to sweat
No matter what we get out of this
I know, I know we’ll never forget