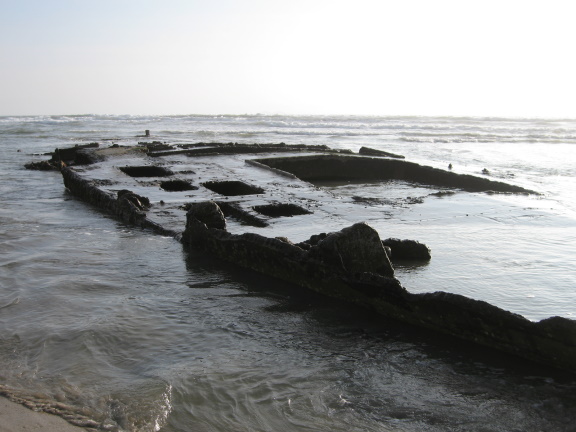 S.S. Monte Carlo detritus, captured in January 2010 when it surfaced.

In the following verse, penned about the S.S. Monte Carlo following its demise, the writer Ida Clarise Gowan uses a hostile, derogatory and accusatory tone. She personifies, or gives human qualities to, the ship, such as being greedy and taking advantage of people. Gowan, then a Coronado, California resident, employs hyperbole by incorporating words like “crime,” “slave” and “mighty master.”

With these literary devices assisting her, Gowan delivers a sermon-like condemnation of gambling. Her poem reflects the sentiments of the anti-gambling faction that existed during the Great Depression.

Today, “Monte Carlo” reminds readers of the historic (and continuous) controversy over the casino industry.

Monte Carlo — forgotten relic,
Heap of ugly stone and clay
Lying in the ocean sand,
The angry waves, your prey.

Asleep in the deep you dream
As you lie in your ocean bed;
You dream again of the glories
And the glittering life you led.

You were the mighty gambler;
You took, but seldom gave;
You, the mighty master
Made each follower your slave.

Luring men on to destruction
Like the Lauri Lee of old;
Heeding not the warning,
Ever seeking your gold.

With the greedy hand of lust
You kept your foe at bay;
He was always the loser,
You were the winner each day.

A fool there was and he believed
The fairy tales you told;
You took advantage of his weakness,
Knowing his lust for gold.

Beckoning onward, ever onward,
Beyond the limits of the law;
The pot of gold at rainbow’s end
Was the picture that he saw.

During a storm the Reaper said,
“Monte Carlo, you must pay;
While angry clouds burst over-head
This is your judgment day.”

The angry wind cried vengeance [sic]
As it hissed and howled by,
Tossing you at the mercy
Of an angry sea and sky.

The heavens ripped wide open;
The thunder roared and said,
“Monte Carlo, you are doomed;
Your gambling days are dead.”

Your moorings broke, you drifted
At the mercy of the sea
That tossed you by the sandy shore
Where you’ll lie for eternity.

You were the mighty ruler,
Beating everything you saw,
Rich man, poor man, beggar man, thief;
You even beat the law.

But now your turn has come,
It is time for you to pay;
The waves will reap revenge
And do the “beating” every day

They will lash you through the ages;
You will always hear them moan,
Making a mighty monument
Of brine, and spray, and foam.

Monte Carlo, the mighty gambler,
You took, but seldom gave;
So hide your face forever
In your Coronado grave.

(As published in the Coronado Journal newspaper on December 19, 1938.)