No Gambling License For You! 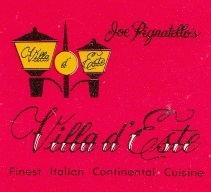 “As a boy in Chicago, [he] learned to cook standing on a milk crate in his mom’s kitchen, where Mrs. Capone — Scarface Al’s mom — would join them,” reported the Las Vegas Review-Journal (May 8, 2009).

That youngster was Joseph D. Pignatello.

Once an adult, the nascent chef prepared meals for his boss, Sam “Momo” Giancana, then head of the Chicago Outfit, when they traveled together. Pignatello was his chauffeur and bodyguard.

Nicknamed “Joe the Cook” because of his superb culinary skills, he worked for years in the restaurant business in Illinois, even running and selling both a bakery and an eatery.

Chef Pursues Ownership
In early 1961, at age 35, he was working as a chef at Anjoe’s,* a popular continental restaurant on Highway 94 in Las Vegas, Nevada that had recently undergone a $100,000 remodel to reflect an Old World ambiance.

After some time, Pignatello expressed his desire to purchase half of the restaurant for $15,000 ($121,000 today).  The owner, Sam Baker, agreed but only if the buyer obtained liquor and gambling licenses.

The next month, the prospective restaurateur was arrested for working without the required permit. On his person, he had $16,000 in cash and cashier’s checks.

In April, Pignatello applied for a gambling license for 50 percent interest in the operation at Anjoe’s. A few days later, entertainer Frank Sinatra reportedly spoke to a Las Vegas official to facilitate the proper agencies’ granting “Joe the Cook” the necessary papers. Later, when the FBI questioned the crooner about it, he admitted knowing the chef through his friend, Giancana, but denied intervening on Pignatello’s behalf.

The Dreaded Monkeywrench
Ultimately, in July, the Nevada Gaming Commission denied him a gambling permit because of his affiliation with Giancana, one of the first underworld denizens to be listed in Nevada’s “Black Book,” thereby banned from entering any casino in the state. Gaming regulators were concerned Anjoe’s would become a front and Pignatello the straw man for the Chicago Outfit, and Baker, which wasn’t his birth name, may have been connected to the Chicago underworld.

Perhaps their argument had merit as Mobster Johnny Rosselli had been spotted holding a meeting at Anjoe’s with eight other people. An organized crime strategist, he was in charge of the Outfit’s holdings in Las Vegas. Contrarily, the gaming at the restaurant consisted of four slot machines, not the setup size for major cash flow, but perhaps the plan, if one existed, was to dramatically expand the enterprise.

Going to Plan B
With the Anjoe’s deal dead, Giancana had an upscale eatery built for Pignatello using a loan from the pension fund of the Teamsters Union’s Central States, Southeast, Southwest Areas. Villa d’Este, which offered fine Italian dining, was located at 355 Convention Center Drive (Piero’s is there today).

“This will be our place, a multimillion-dollar restaurant,” the mob boss told the chef, reported the Las Vegas Review-Journal (Nov. 29, 2015).

In fact, it became a known haunt for mobsters, celebrities and other powerful people. For Giancana, obviously it was a favorite, Sinatra, too. He ate there whenever he was in town. Actor Joe Pesci fell in love with Pignatello’s food when he was in Las Vegas filming the movie, Casino.

* Anjoe’s originally was the Big Hat saloon and casino in which, in 1948, the owner Sam Baker shot a man. He subsequently changed the name to Villa Venice and ran it only as a restaurant. A few years later, Baker leased the facilities to other parties who operated both gambling and dining components. After an intervening devastating fire, Baker reopened the place in the late 1950s as Anjoe’s.