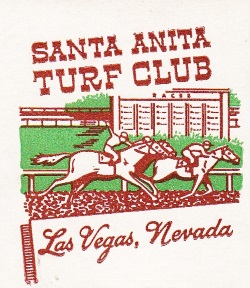 Illegal Activity Uncovered
Their testing revealed that the broadcasts had taken place between 10:30 a.m. and 6:30 p.m. daily and had originated from equipment in Room 228 of Vegas’ Apache Hotel on Fremont Street.

The guest register showed a Charles Stauffer, 28, residing there.

Stratton, Day and Jones raided the space, discovering a rigged system for hijacking horse racing information — odds, entries, results and pari-mutuel payoffs.  Through a hole cut in the Apache room’s floor, which opened into an air duct that traversed the El Dorado Club’s ceiling, a microphone picked up the race details announced via loud speakers at that casino. It fed the sound into a transmitter which then sent it to a receiver in the Santa Anita Turf Club, 60 yards away, across the street.

The stolen data originated from Chicago-based Continental Press Service, which collected them from the horse racing tracks and distributed them nationally via leased Western Union facilities. However, three men controlled distribution of that information in Las Vegas — Moe Sedway, Morris Rosen and Cornelius Hurley.

Hurley provided exclusive access to the race wire to Sedway and Rosen, who in turn sold the service only to select casinos in town. The Turf Club wasn’t one of them. In, fact, for unknown reasons, they’d turned down the owners — Ed Margolis and Sam and Dave Stearns — when they’d applied previously, leading to them tapping the wire.

Five suspects were arrested for the crime: The three Turf Club owners along with the man they hired to install the equipment at the Apache, John Melvin Cole, 26, and Stauffer, 28.

Attempted Double-Double Cross
Stauffer, who was in Nevada for a divorce, had been offered a fully comped room if he’d turn a transmitter on and off at two designated times per day. He’d agreed.

However, he’d figured out what was transpiring and tried to capitalize on that knowledge for added benefit. He’d told Hurley that for $6,000 he’d disclose where the “bootleg” transmitter was located.

Hurley had negotiated the price down to $4,000, but no deal had been finalized when the cab driver set the subsequent events in motion.

Wire Tapping Consequences
A federal grand jury indicted Cole, Margolis and the Stearnses in mid-1949 for violating the Communications Act of 1934, a felony. They were released on $1,000 bond apiece.

In federal court in February 1950, the men’s defense attorney asked for suppression of the evidence against them for two reasons:

The search warrant that law enforcement had used to get into the Apache Hotel room was illegal as it hadn’t been directed at any one person and that a deputy sheriff, rather than a requisite U.S. marshal, had served the warrant.

• Because Cole was illiterate, he couldn’t have written the confession presented.

• The judge granted both motions and dismissed the grand jury indictments against all four.

Cole was released, but the Stearnses and Margolis were charged with violating FCC regulations governing low-power radio stations, a misdemeanor. They all pled guilty and, ultimately, paid $1,200 apiece in fines.

As for Stauffer, he was charged with operating a radio station without a license, a felony with a maximum penalty of $10,000 and two years in federal prison. It’s unknown what sentence he received, if any.