Mobbed Up Casino Opens in The Biggest Little City 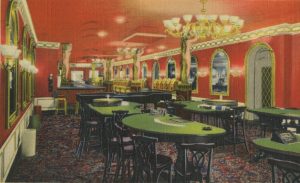 Interior of the Bonanza Club in Reno, Nevada

The debut of the Bonanza Club* on October 3, 1944 in Reno, Nevada, was doubly significant. Formerly the Barn Club, the new casino was regarded as one of, if not, the finest in the state; about $300,000 (roughly $4.2 million today) were spent on redecorating and equipping the place. It also was one of the first gambling houses in The Biggest Little City to have been funded and run by ex-Nevada mobsters.

Underworld Involvement
Financing to redo the property was provided allegedly by Moe Dalitz, Detroit mobster, and Frank “The Prime Minister” Costello, boss of New York’s Luciano (later Genovese) crime family. Their straw man, Wilbur Clark, who’d purchased and fronted the El Rancho Vegas in Las Vegas (1941) for Costello and mobster Meyer Lansky, bought the Bonanza Club in 1944 and ran it for only months. He would move on to open the Monte Carlo club in Las Vegas (1945), the Desert Inn, also in Vegas (1950), and the Tropicana casino and the International Casino, both in the 1950s in Havana, Cuba.

Mobster Louis “Lou” Wertheimer** officially took Clark’s place at the Bonanza Club the same year it opened. A former member of the Chesterfield Syndicate in Detroit, Michigan, he had numerous past arrests and gambling experience running casinos in home town Cheboygan and Detroit, Michigan; Cleveland, Ohio;, and West Hollywood and Palm Springs, California. Wertheimer would sell his ownership in the Bonanza in advance and move to operating the Mapes casino when it debuted in December 1947.

A Look Inside
The elaborate Bonanza Club boasted a gaming section with two roulette, two craps, three 21 and one Big Six games along with 24 slot machines. It also contained a 58-foot bar with a full length mirror. In the 100-person dining room, lunch and dinner were served, and entertainment featured a two-piano ensemble or a violin-piano duo.

“The most striking attribute of the Gay-Nineties motif club were the wall fixtures, eight-foot tall nude ladies who appeared to be holding the ceiling in place,” wrote Al W. Moe, in his Nevada Casino History blog. These busty figurines were custom made by a Beverly Hills firm, “which employed live girls to model and from whom were cast the delightful likenesses, completely charming as well as stunning, wrote Raymond Sawyer in Reno, Where the Gamblers Go!

The Architect
The club was built by Thomas E. Hull, the mobster-affiliated owner of Hull Hotels, which operated hotels it constructed, including the El Rancho in Las Vegas (until Clark and Detroit mobsters took over) and numerous non-gaming ones in California.

* The Bonanza Club was located at 207 N. Center Street, Reno. The property today is part of Harrah’s Reno Hotel and Casino.

** Lou’s eldest brother, Myrton “Mert” Wertheimer, ran the gambling at the Riverside Hotel starting in 1949 and bought, with a co-investor, the entire property from George Wingfield in 1955.

Photo from the University of Nevada, Reno’s Digital Collections