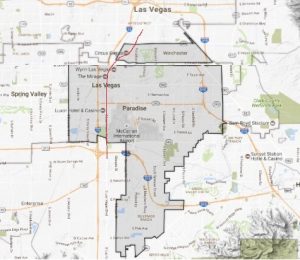 When people are on the Las Vegas Strip, they’re really in Paradise — the town, that is.

In 1950, a rumor surfaced that the City of Las Vegas’ boundaries would be expanded to include the then multimillion-dollar luxury resort area on South Las Vegas Boulevard. Disliking the idea, the proprietors of the hotel-casinos there collectively strategized to get the area in which their properties sat deemed an unincorporated town. That status would prevent the city from annexing it without the owners’ unanimous approval.

Money was the primary reason the Strip businesses opposed incorporation into Vegas. Costs — gambling and liquor license fees and taxes, for instance — within the city were higher than outside, specifically a tax rate of $5 per hundred dollars’ valuation versus $3.48.

In December the Clark County commissioners approved designation of a one-mile wide and four-mile long stretch as the unincorporated town of Paradise, said to be named after the Pair-O-Dice, a club whose property eventually became the Last Frontier.

These men comprised the newly formed, required town board:

A major change for the properties in the new township was the lack of access to city services, including sewage disposal and fire protection services. Also, half of all gambling fees collected in Paradise had to be spent on public improvements within the town as opposed to throughout the county, as was the case before.

“What is good for the valley is good for the Strip. We hope this move will bring you better roads, better schools and better everything,” Greenbaum said at a town meeting.

In early 1951, property owners in Paradise Valley, the southern part of the Las Vegas Valley, sought and received approval to annex their unattached land to the newly established Paradise. This expanded the area to 54 square miles.

Paradise Divided
Later, out of the northern portion of Paradise, a second township was created, 7.5 square miles, that became known as Town A. The larger, remaining portion of the original unincorporated Paradise became Town B.

Eventually Towns A and B received official names.

In 1953, Town A was named Winchester. At the time, it encompassed the Sahara, El Rancho Vegas and Thunderbird hotel-casinos on the Strip’s northern end, as well as Last Frontier Village, the Las Vegas Park Race Track, numerous motels and some private homes. The Town A residents liked the name Winchester for its Western flavor and chose it over other suggested monikers, including McCarran, Sunset Heights, Empire, Silverado, Tiffany and Valhalla.

“In addition to getting a new name, the town figures to be one of the richest per capita in the world, since it covers practically all of the multi-million-dollar resort hotel industry, plus several costly motels and the expectation that another $20 million in new hotels will be erected in the near future,” reported the Reno Evening Gazette (Oct. 8, 1953).

Town B recaptured the original name, Paradise. Much larger in land size, it included the Desert Inn, Sands and Flamingo hotel-casinos on the Strip’s southern end and the Paradise Valley ranch area.

Attempt at Unification
In 1975, Governor Mike O’Callaghan signed Senate Bill 601, which would’ve doubled the size of Las Vegas by expanding its boundaries to include the Strip (Winchester and Paradise), Sunrise Manor and East Las Vegas — all unincorporated towns. The goal was to consolidate the various city and county governments and services.

However, before the change could be carried out, the Nevada Supreme Court, in June 1976, ruled that the legislation was unconstitutional for various reasons. One was because the law was passed during a special session, which is illegal per the Nevada Revised Statutes.

“I think that ends it for good,” said Senator James Gibson (D-Henderson), who’d introduced the bill. “It will probably kill [a] merger for quite a while in the future” (Las Vegas Sun, June 8, 1976).

Though relatively unknown except to locals, Paradise and Winchester still exist today, independent of Las Vegas.