Here’s one of Roger Price’s Droodles, funny drawings of everyday objects, called “Sick With the Measles.“ 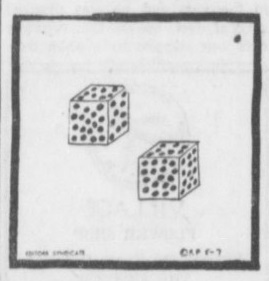 “When my landlady Mrs. Goonsgarten saw this Droodle, she made me sign a statement saying that I never again would mention the subject of dice or gambling in her boarding house. I don’t blame her for feeling that way after what happened last month.

“She rented her basement apartment to two men, Dr. Slick and Dr. Slade, who claimed to be bone specialists but later turned out to be operators of a floating crap game.

“At first Mrs. G. didn’t suspect anything, but when 30 or 40 ‘patients’ would arrive at midnight and stay for ‘treatments’ until 5:00 in the morning, she smelled a rat. But when she heard Doctors Slick and Slade diagnosing their ailments, she called the cops.

“Even Mrs. Goonsgarten knows there aren’t any diseases like box cars, snake eyes and eighter from Decatur.”