Criminal drama occurred between two men late one November morning in the Wieland saloon in Reno, Nevada in 1904.

James Mann, a Wyoming man who sometimes worked in Silver State gambling clubs — the Louvre saloon and Oberon bar — had been imbibing for some time inside the Wieland. He jokingly began to spar with another intoxicated patron, P.J. O’Halloran, a laborer from San Francisco who’d been helping construct an irrigation canal outside of Reno.

O’Halloran, who’d arrived in town the night before and had few acquaintances there, grew annoyed and beat up Mann, who in turn got angry and viciously returned blows. During the heated brawl, O’Halloran knocked him down several times and gave him two black eyes, numerous bruises on his face and a welt on his chin. 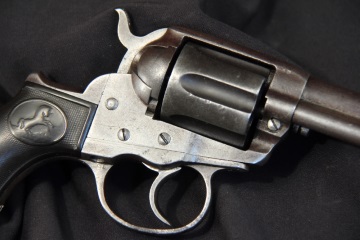 Mann went to the saloon’s back room where he washed up. When he returned, he grabbed the bartender’s revolver from behind the bar and fired twice at his then foe.

“He did not give O’Halloran any warning and was cool and deliberate in his deadly work,” reported the Nevada State Journal (Nov. 20, 1904).

The bullets missed. As O’Halloran ran out of the saloon, Mann followed and shot twice, hitting O’Halloran once in the back of the head, “plowing beneath the scalp for a distance of two inches before it made its exit” (Reno Evening Gazette, Nov. 17, 1904). The impact gave the victim a concussion, but he remained conscious.

Unbelievable Outcomes
While O’Halloran staggered around outside of the building, Mann went back inside the saloon. Officers soon arrived, arrested and jailed Mann, who’d told them his name was James Bernard.

A doctor was summoned, who tended to O’Halloran before being taken to the county hospital. There, when a newspaper reporter tried to interview him, after answering only a few preliminary questions, he “dozed off into a drunken slumber” (Reno Evening Gazette, Nov. 17, 1904).

The following day, O’Halloran was doing well, lively and walking about the hospital. Because he’d sustained only a flesh wound, it was believed he’d heal in a couple of days. After getting discharged, he remained in Reno, heavily consuming alcohol.

In the meantime, Mann/Bernard was charged with shooting with intent to kill. A preliminary hearing took place, at which witnesses, including O’Halloran with his head swathed, recounted the events. Mann/Bernard declined to make a statement. The court determined he should be bound over to a grand jury. Unable to pay the bail of $1,000 (at least $25,000 today), he was detained in the county jail.

About two weeks later, O’Halloran again was hospitalized for an extreme case of pneumonia and, soon after, died. The autopsy revealed the cause of death hadn’t been the gunshot wound but, rather, typhoid pneumonia brought about by alcoholism and exposure. The deceased, who’d claimed to be only 24 years old, had been a hard drinker who hadn’t taken care of himself.

Early in 1905, Mann/Bernard entered a plea of not guilty, and his trial was set for February. That month, however, because the state’s two eyewitnesses had left Nevada and the prosecuting witness, O’Halloran, was indisposed permanently, the case was dismissed. Mann/Bernard was released from jail.