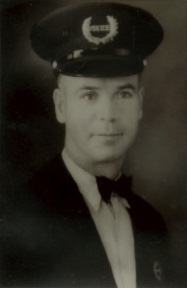 At about 4:30 on a Sunday morning, a drunk Bartley “Bart” J. Smithson was target practicing in the Palace Club, shooting at a spittoon and a silver dollar with a 0.38 Smith & Wesson Special. Bullets were flying, some lodging in the building’s rear wall.

Smithson was a well-known resident and the proprietor of this saloon-gambling house in the rural mining town of Ely, Nevada.

What The . . . ?
Nearby, Herbert “Burt” D. Long, on duty as the night officer and in the Northern Hotel’s lobby at the time, heard the shots. He walked down Aultman Street to the Palace Club, entered and noted a few patrons inside.

A conversation ensued between Long, 32, and Smithson, 48, something like this:

— “That makes no difference. Give me your gun.”

— “I’m going to give it to the district attorney. He’ll just give it back in the morning.”

Long took the revolver away from Smithson and ejected the shells.

When Long was on his way to the door to leave, Smithson darted behind the bar, grabbed a rifle, pumped a shell into the barrel and called Long’s name. When the officer turned, Smithson, only about four or five feet away, shot him. Long, hit in the heart, fell and quickly died.

Law and Order
The sheriff and marshal rushed to the crime scene after learning of the incident. They busted into the rooms above the saloon-casino and arrested Smithson, who surrendered willingly.

In jail, he was charged with first degree murder.

At his arraignment, he pleaded guilty and was held over for trial without bail.

The court proceedings began Feb. 29 and lasted four days. The prosecution asserted that Smithson’s shooting of Long was premeditated, that once Long had taken his gun, Smithson had decided to kill him.

The defense counsel argued that Smithson had acted in self-defense. He presented witnesses who testified that Long had been armed, had used abusive language and had threatened to hit Smithson over the head with a revolver.

The prosecution, however, established that Long hadn’t had a weapon.

The jury found Smithson guilty but directed the maximum punishment to be a life sentence. That’s what the judge gave him, to be served in the Nevada State Prison in Carson City.

Smithson’s subsequent appeal for reduction of the verdict to manslaughter and a motion for a new trial were denied in the lower court.

Subsequently, he took the case to the Nevada Supreme Court. In trying for a new hearing, he argued two points: 1) The judge had omitted critical information in his instructions to the jury and 2) Officer Long had lacked the power to arrest Smithson for the misdemeanor of firing the pistol because he hadn’t witnessed it occur.

The jurists, however, refuted the latter claim, stating Long hadn’t needed to see the offense take place if his other senses (his hearing) had alerted him to it unmistakably. They denied Smithson’s request for a rehearing.

Smithson was released after serving 12 years and passed away while living with a brother in Mason Valley a dozen years later at age 73.